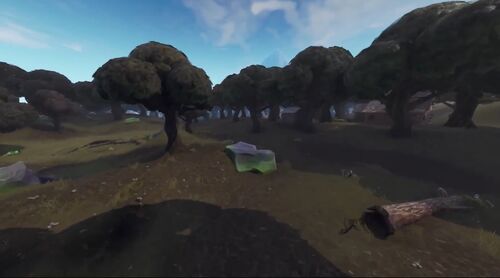 Wailing Woods was a named Point Of Interest in Battle Royale added in Season 1, located inside the coordinates H3, H4, I3 and I4, north of Lonely Lodge and east of Tomato Temple. It was a forested area abundant in Wood with wooden sheds, cabins, an indestructible bunker and a hedge maze that contained an underground research facility in the center.

Wailing Woods was untouched after Season 6 until the last week of Season 7, where the place started to dry up. After a few days, the area had completely dried up and was fully brown. On February 27th, ashes started to rise over the grass in Wailing Woods.

Wailing Woods was removed at the start of Season 8, being replaced by Sunny Steps and The Volcano, which in Season 9 was renamed to Pressure Plant.

In Chapter 2, a similar location called Weeping Woods was added.