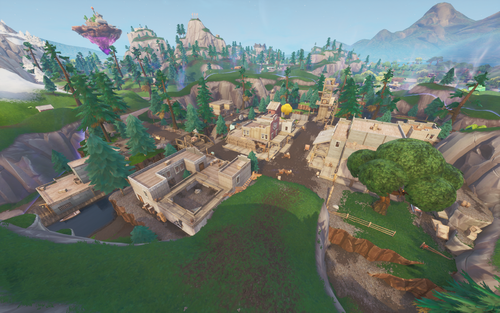 Tilted Town (Formerly Neo Tilted) was a named Point Of Interest in Battle Royale added in Season X/10, located inside the coordinates D5 and D6, southwest of Loot Lake, north of Greasy Grove, northwest of Shifty Shafts, far south of The Block, far east of Snobby Shores and west of Dusty Depot. It was a old and western-themed town with various different shops, houses, a bank and under construction clock tower plus much more.

Tilted Town was added on the 10.00 Content Update, replacing Neo Tilted which was the replacement of Tilted Towers in Season 9. There was a giant bubble around Tilted Town. As soon as players enter this bubble, they were not allowed to build or destroy anything in this zone. Some weapons were unvaulted and are exclusive inside the circumference of the bubble. Players skins also were granted cowboy outfits when entering the area.

In week 8 of Season 10, another rift beacon was constructed in Tilted Town, which transformed the POI into Gotham City for a Batman collaboration.

For more detail on buildings, go to Tilted Town/Buildings

The clock tower from Tilted Towers which is still under construction, although placed in a different location.

The largest building in Tilted Town which is a 4-story hotel with a saloon on the first two floors. The 3rd floor appears to be empty and the final floor is the hotel.

A jail which also doubles as the sheriffs office. The jail has a courtyard which is not normal for wild-west jails

A building that has a lot of coffins in it and could be a morgue or a coffin shop. The building has a design that looks like a fish. It may be relating to the Fish Buildings from the previous Neo Tilted and Tilted Towers.

A mine system similar to Shifty Shafts. the mine has shafts and is complete with a Tipple

A bank that is connected to a gun shop. The bank appears to have recently had a break in as the wall to the safe appears to have been rammed with something and all the money is gone.

A gun shop that the bank is connected to. The shop is full of ammo boxes and an apartment is on the second floor.

Note: These weapons were only available inside the Rift Zone of Tilted Town.

They could not be looted anywhere else however they would be kept after leaving the rift zone. But due to Tilted Town being removed, all the weapons that were unvaulted in Tilted Town are now back in the vault.