Tilted Towers was a named Point Of Interest in Battle Royale added in Season 2, located inside the coordinates D5 and D6, in between Loot Lake and Shifty Shafts. It was the area with the most rooms, item chests, windows, and high-rise buildings.

Tilted Towers was first introduced on a development update and was released on January 18, 2018 as a part of Patch 2.0. In Season 4, a meteor hit Tilted Towers and created a huge crater at the center of the city, completely destroying the 4-story building it hit. After the crater was patched up, construction of a new building began. In Week 9 of Season 5, the building was finished and was turned into a sporting goods shop. In Week 10 of that season, it was destroyed by the CUBE. At the beginning of Season 7, Tilted Towers was partially covered in snow, later that Season the building that replaced the sporting goods shop was completed, only to soon be destroyed by the The Earthquake (once again). The snow was removed from the city and its immediate surroundings with the beginning of Season 8. On May 4th, 2019, the day of The Unvaulting Event, Tilted Towers was mostly destroyed by the Volcano, along with half of Retail Row, and part of the iceberg in Polar Peak. Buildings and cars that were left were a mess, but the "unluckiest" building in the game (No Sweat Insurance Building) managed to survive.

On May 9th, 2019, during the start of Season 9, Tilted Towers was re-made and re-named to Neo Tilted, to fit with the futuristic theme for the season.

On December 2nd, 2020, at the start of Chapter 2 Season 5, Tilted Towers was combined with Salty Springs to become Salty Towers.

For more details on structures and buildings, visit Tilted Towers/Buildings

A residential brick house at the southwest part of the city. It had three apartments and an underground garage. 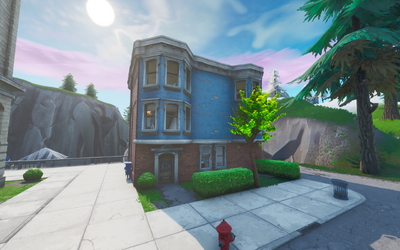 An 8-section high Clock Tower and the accent piece of the city.

3 Chests could be found inside the infrastructure; 2 chests at the top level and 1 at the mid level supported by woods. 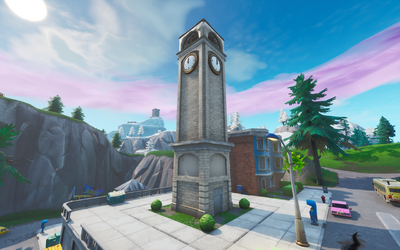 A commercial establishment pawnshop at the low-level south part of the city.

2 Chests could be found at the gap the leads to underground on the top left corner of the shop. 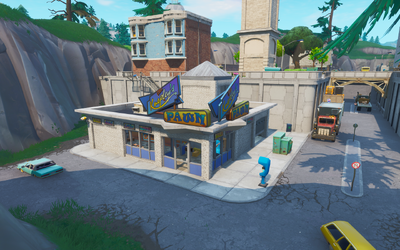 A interconnected Twin 3-story white and brown building at south part of the city. Buildings were occupied with residential rooms and outside was a lamp post with a circular flower landscape.

2 Chests could be found at the 3rd floor vacant room of the white building and the behind the walls of the 3rd level stair of the brown building. 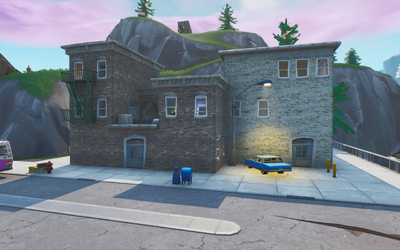 A mini garden on the west part of the city that had 2 big trees and surrounded with boxwood bushes.

1 Chest could be found underground pipeworks under the brick sidewalk asphalt. 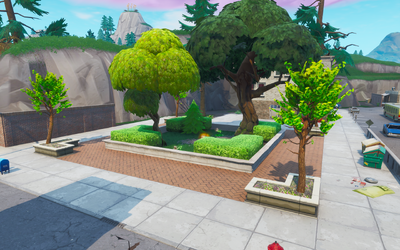 Semi Trucks were vehicles with a container attachment that can be found at the Tilted Towers.

2 Chests were found on a separate semi trucks; one is underpass and the other one was outside the street nearby Castle Tower.

Small TACOS house connected to a residential at the northwest part of Tilted Towers.

2 Chests could be found on ground floor bedroom and behind the wall on the third floor. 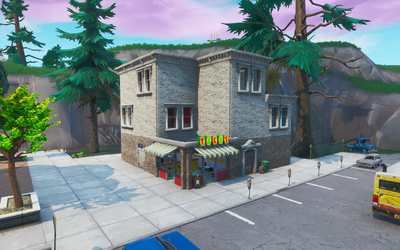 Coffee shop branded with Big Shots Espresso Cafe at the north part of the city. Above the coffee shop was a half-covered basketball court. The

2 Chest could be found at the ground floor supply room and behind a broken wall. 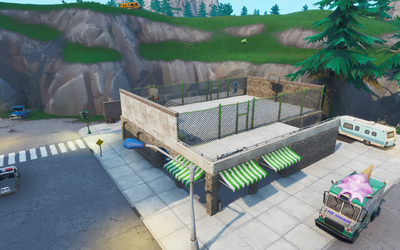 An open garage near the center and parking lot of the city. The car that was outside of the garage on Season 3 was now occupying the inside where

1 Chest could be found. 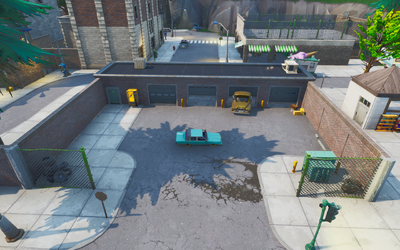 A small branch of NOMS Grocery Store at the center part of the city. The

2 Chests could be found at ground floor storage area and behind the wall. 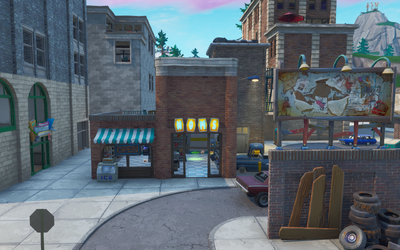 A twin apartment building that was commonly referred as "L" apartment for its L-shape architecture. The

3 Chests could be found on the ground floor above the laundry and 2nd floor behind the dresser of the first the building and the other one was on the bathroom stall of the second building. 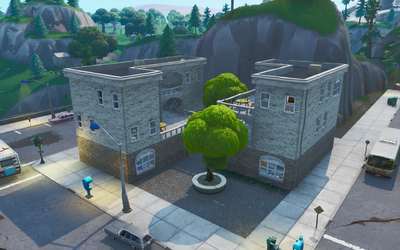 A 5-story office building that was left unfinished at the northwest part of the city. There's an unnamed convenience store on the ground floor and an office setup on the 2nd floor. Piles of plywood could be found on 3rd 4th and 5th floor that were unfurnished. The

2 Chests could be found at the top floor and behind wooden walls on the 3rd floor. 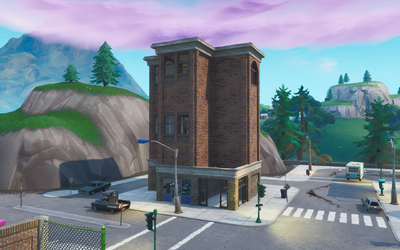 A 5-story insurance building comprised of some offices, a lounge and a parking garage. The

5 Chests could be found in a restroom stall, in the parking garage, on top of a file cabinet in an office, and two can be found hidden behind walls in the lobby. This was the only building left standing after the Volcano erupted. 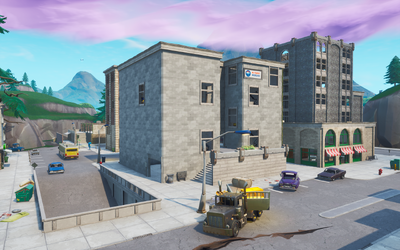 Second highest building in Tilted Towers, that was a high-rise type of building composed of residential rooms and garage. The

4 Chests chests could be found on a the rooftop, on the bed at the top floor, behind a broken wall and a gap from the 5th floor. 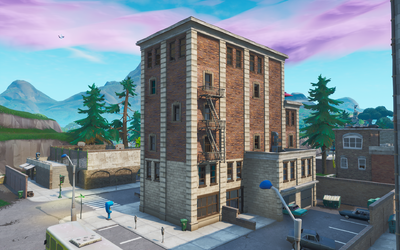 The tallest building is sometimes referred to by the community as Trump Tower. The building had a McGuffin's bookstore with dining areas inside. The third, forth, fifth and sixth floor that had piles of plywood scattered. The rooftop part had four large air-conditioning units. The 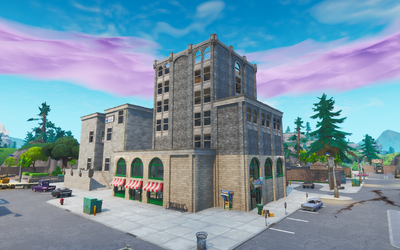