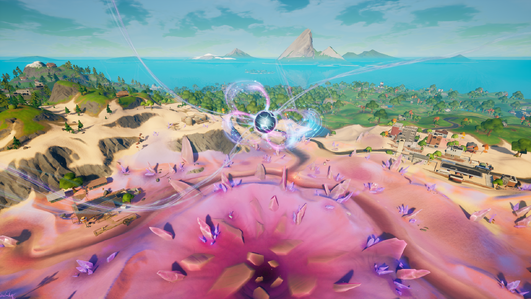 The Zero Point is an important storyline object in Battle Royale. It is implied that it is the "Core" or "Heart" of reality, keeping it stable and making interdimensional connections with other realities, while also destabilizing time when unstable. It is implied to be heavily connected to The Loop, another storyline object that hasn't yet been clearly explained,but has something to do with Fortnite characters speaking unintelligibly and The Storm.

It was first seen during The Unvaulting Event in a stable, contained form behind Singularity's desk.

During Season 9, The Zero Point was seen again during and after The Final Showdown Event. Upon arriving on the island, The Devourer began to attack and damage the Gateway to try and access The Zero Point and absorb it's energy, before being ambushed by the Mecha. After being weakened in the fight, the Mecha smashed its fist through the Gateway and pulled The Zero Point from The Vault. It then absorbed its energy and thus destabilized it, as it floated above the vault within Loot Lake. It began to crack and further destabilize until Season X began. The cracks before were large and launched tendrils of energy. The Zero Point exploded, which caused, as seen in the trailer, Jonesy to be transported to a sort of space-time limbo, where he saw some of the past seasons' objects. At the end of the trailer Jonesy was transported back to the Battle Royale island where Dusty Depot and the Meteor, both brought back, were frozen in time. Meanwhile, The Zero Point had been frozen in a mid-explosion state, where it was surrounded by a low-gravity field of frozen time. It became slightly more cracked when a new Rift Zone was close to opening.

During The End event a rift appeared above Loot Lake after the meteor was sucked into a rift by The Seven. A rocket came out of the rift and pointed a target laser toward it, just like The Visitor did in Season 4 towards Tilted Towers. The Rocket collided with the anti-gravity zone which sent out a huge shockwave, knocking all players into the air. Afterwards, the meteor came out of the rift with the remaining six of The Seven's rockets surrounding it. Eventually, the meteor collided with The Zero Point's anti-gravity zone which it began to bend, until the zone finally collapsed, and the meteor collided with The Zero Point, creating a massive explosion.

Shortly after, the near complete destruction of The Zero Point caused the universe and reality to begin collapsing in on itself, creating a single black hole that sucked everything into it. The players in the lobby also experienced the event sucking them in as well. This black hole remained for two days. It is suggested that all this was done by The Seven to recontain and reverse the damage to The Zero Point, but went awry, as suggested by a secret message decoded from numbers that appeared around the Black Hole during the downtime, somebody was outside the Loop when the event occurred, meaning reality still wasn't stable enough for the recontainment and so it collapsed.

After the two days, the universe began to rebirth for some reason, possibly because The Zero Point had fully restabilised, or because the black hole had fully decayed. A second big bang occurred where, as confirmed by Donald Mustard, the old universe's matter that had been "stored" inside the Black Hole was quickly reorganised and reformed in a short amount of time, creating the new Chapter 2 map. However, when the matter of the island was reorganised, not all locations disappeared. Furthermore, some older locations, such as Retail Row, had returned. This is most likely down to two reasons: Matter has "memory" in a sense that it can "remember" its original form, resulting in the reformation of a few old POIs, and some parts of the island were more reorganized than others, therefore meaning that some old POIs were retained, such as Salty Springs

In Chapter 2 Season 4, The Zero Point, and thus the Gateway, was revealed to have been deep underground, below the central island when Galactus pulled it out to absorb its near-infinite energy. This would lead to reality collapsing if he wasn’t stopped. This led to the events of the The Devourer Of Worlds Event.

At the beginning of Chapter 2 Season 5, The Zero Point was seen in a very unstable state, similar to it's Season X state without the anti-gravity zone, possibly because it hadn't fully begun collapsing yet. Because of this, The Zero Point and its volatile effects began to alter the surrounding landscape, causing the middle of the island to become a desert. It also brought back pieces of several locations from the first island, such as Tomato Town and Flush Factory. Oddly enough, they were placed in roughly the same areas as they were on the first map. Standing or gliding near The Zero Point currently gives a strange, out-of-focus/tri-coloured appearance to the character and surrounding area, as well as causing pieces of The Zero Point to open up. As of the V15.5 update, it has become hollow with a light inside of it. It also visually distorts anything immediately around it, and occasionally sends out "Reality Waves". Touching it plays a short animation where the player is seemingly sucked into it before being shot out on the opposite side of where you came through with a low-gravity effect. This regenerates the player's health and gives about 48 shield if already at full health.

It is near impossible to reach The Zero Point unless you build with enough materials (in which case you'll likely be shot down), or if you glide into it. In V15.10, The Zero Point began creating Portals linking to different realities. Despite being called Portals, the player cannot enter them. How portals work is that; Agent Jonesy will travel to another reality, and take that reality's best hunter(s) into the Fortnite reality to stop anyone from escaping The Loop. As of right now, there are 8 Portals. The first portal that The Zero Point created was a portal leading to the Walking Dead reality. Said portal was created in-between Salty Towers and Weeping Woods. The most recent portal was created northeast of Hunter's Haven, which leads to the Antman reality.

On February 16th, Characters nearby The Zero Point have acknowledged that it is growing unstable. Example, Deadeye's dialogue changed from "Make it quick, partner'" to "Strange things are happening around these parts." He lives in the Sherriff's Office, which is just northwest of The Zero Point. Mancake's dialogue has changed too for "Was that thing always so.... unstable?". Menace has also his dialogue changed for "Can you feel it? We're gonna have a good fight on our hands.".

With the 15.50 Update that came on March 2nd, The Zero Point has grown even more unstable, filled with large cracks, pulsating, and sending large waves of Zero Point energy through the Portals connected to it. This is possibly a setup for the Chapter 2 Season 5 live event. On March 10, The Zero Point now pulsates every 2 minutes. The time has been shrinking since, and as of March 14, The Zero Point pulsates every 30 seconds.

Evolution of the Zero Point