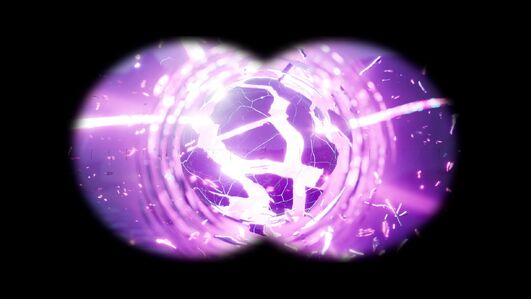 The Zero Crisis Finale is a Live Event that takes place when you open up the game during Chapter 2 Season 6 for the first time. It involves you trying to help Agent Jonesy close multiple of the portals, fixing The Zero Point after he turns into The Butterfly.

The cinematic starts with Jonesy hanging off the Battle Bus, looking at the Zero Point. Doctor Slone warns him of its instability, telling him to save himself. Jonesy refuses, stating he will get the Seven, attempting to stabilize it. The Zero Point sends a blast, hitting the Battle Bus and knocking the Looper out of his hands. He jumps off the Battle Bus to get it. Jonesy catches it, but then proceeds to fall into a bush. Doctor Slone demands he returns, but he takes of his earpiece and crushes it, with chaos ensuing as he gets closer to the Zero Point. On his run to the Zero Point, he is attacked by Xenomorph and T-800, but are attacked by Sarah Connor and Ripley. Mancake also attacks Jonesy before fighting Kratos. Other fights happening are Doggo vs Chun-Li, and Predator vs Meowscles. Peely also appears, but is obliterated by Ryu. TnTina also tries to stop Jonesy with her missile. He eventually arrives at the Zero Point, and throws his Looper into it, pulling one of The Seven out of their reality. A meteor is transported to this reality, where it continues to crash into the ground. The pod inside is similar to the one inside the meteor in Season X/10. Out of it comes a new member of The Seven, The Foundation. Jonesy states that he understands he might not trust him, however before he finishes the sentence The Foundation attacks, leaving Jonesy laying on a rock. Before The Foundation finishes him off, Jonesy promises he will get him to Genö, in exchange of The Foundation helping contain the Zero Point. The Foundation asks if he will get The Sisters, of which Jonesy also promises to retrieve. The Foundation accepts and the mission begins.

The event starts with Jones and The Foundation staring up at the Zero Point. After a short conversation, the player is able to be controlled. The Foundation breaks apart the Zero Point and asks Jones "What did you do to it?" Jones answers, "It wasn't me! There was... an incident." The Foundation keeps probing the Zero Point, mentioning the level of "entanglement" might be too much for him to fix. After Jones refuses to give up, however, The Foundation answers "Who said anything about giving up? Stand by." After warning Agent Jonesy that once the Zero Point "starts to bloom", there is no return. After this line of dialogue, portals suddenly begin opening up everywhere. The Foundation reveals that the "portals" aren't actually portals, but signs of Reality breaking apart. After Jones closes the first portal, however, a Reality Wave causes Jones to turn into The Butterfly, and the player into a Battle Pass Season 6 skin. After some more dialogue, the player grabs the device Jones used to close the other portal and closes the adjacent portal. However, this causes what seems to be petals of a flower to "bloom" from the Zero Point. After this, three more portals spawn around the map, and Jones inadvertently teleports himself and the player to the first one. A portal is found near Holly Hedges, where the player is turned into Cluck after a reality wave destroys a build fight. The next portal is near Salty Towers, but is guarded by Wolves until a lightning strike scares them away. This next reality wave also changes the player to Lara Croft, and Salty Towers is transformed into Boney Burbs. The final portal appears on a hill near Hunter's Haven, and a Choppa appears with a person inside shooting at the player, before a reality wave transforms the player back to their normal skin and causes the Choppa to vanish. As the player closes each portal, more and more "petals" bloom from the Zero Point. Eventually, after an intense light show, The Foundation announces that he can't stop it from exploding, but he can contain the blast. The Spire then materializes around the Zero Point, with The Foundation intending to seal himself inside. Afterwards, the player is teleported near the spire, and after ascending it, Jones turns back to normal, and The Foundation tells him that he needs to "seal the Zero Point and overload the device". Jones is reluctant to do so, as that would trap him inside the Loop. The Foundation then says, "We'll both have to fight our way back". He then tells Jones to "not give up" and reminds him of their deal. Jones agrees, then throws the device at the Zero Point, causing it to reform with The Foundation sealed inside. For a moment, The Foundation is seen inside the Zero Point, before tendrils draw over the Zero Point, the screen turns white, and the Season 6 Battle Pass trailer plays.