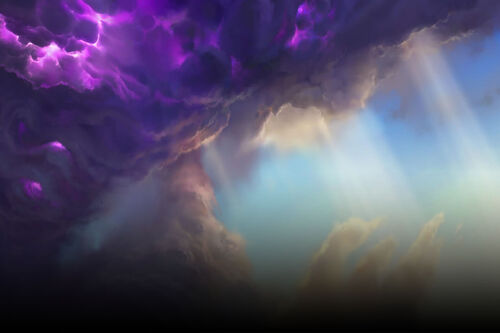 In Battle Royale, the storm is a dangerous area encircling the safe zone. Any player outside the safe zone is in the storm and takes damage. Over the course of a game, the size of the safe zone progressively shrinks, forcing remaining players into the same location.

The safe zone represents the eye of the storm, and is the shape of a circle centered somewhere on the map.

The safe zone and storm move in phases:

Each storm circle that appears is smaller in radius than the previous circle, with a center chosen randomly.

Safe zones 1 through 4 are "non-moving": they will shrink to a storm circle with the center somewhere inside the current safe zone.

Safe zones 5 and later are "moving" in competitive game modes: they can shrink to a storm circle with a center somewhere outside the current safe zone.

In the standard game mode, the first safe zone initially covers the whole island and is not visible on the map.

1 minute after the Battle Bus finishes crossing the map, the first storm circle appears on the map, showing where the safe zone will first shrink to.

Storm Circle 10 has NO safe zone.

The CUBE was first creation of The Storm in Season 5 which made corrupted clones with the first being Brite Bomber, followed by Jonesy, Wild Card, Dark Red Knight, Power Chord, Tricera Ops, Rex, Bash and Skully. A second creation was formed in Season 9 when Tempest was born.

In Chapter 2 Season 2 during The Device Event, The Storm created an ocean-like wall as revenge against Midas. When The Wall of Water collapsed, it flooded the left side of the map completely, causing The Flood.

When the Eye of the Storm fully closes in, the Loop resets.