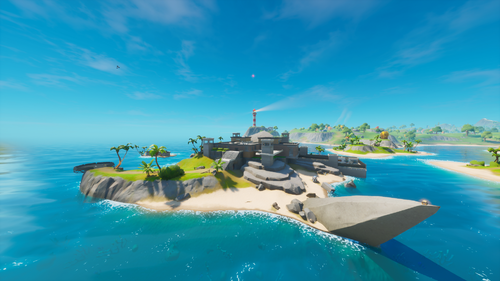 The Shark was a named Point Of Interest in Battle Royale which was added to the Map in Chapter 2 Season 2, located inside the coordinate B1, far north of Sweaty Sands and northwest of Pleasant Park, in the top leftmost corner of the map. It was an island with a large prison that used to be owned by Ghost with a rock formation in the outline of a shark. It was destroyed in Chapter 2 Season 3 by a flood and became a landmark called Sharky Shell. Skye patrolled the area with her Mythic Assault Rifle and her Mythic Grappler, which were both dropped upon her death.

There were security cameras and turrets, as well as Henchmen, stationed throughout the facility. Multiple phone booths are also located around the area, which allow for the player to disguise themselves. As the POI is located on an island, there are Motorboats that can be found near the docks, the shore, and the Shark's mouth. There was also a Choppa located on a helipad.

Before the 12.40 update, The Shark used to be a modern house. It was also unaffiliated, having neither Ghost nor Shadow henchmen.

At the start of Chapter 2 Season 3, The Shark was flooded, wrecking the entire location and making it into a landmark called Sharky Shell.

For more details on structures, visit The Shark/Buildings