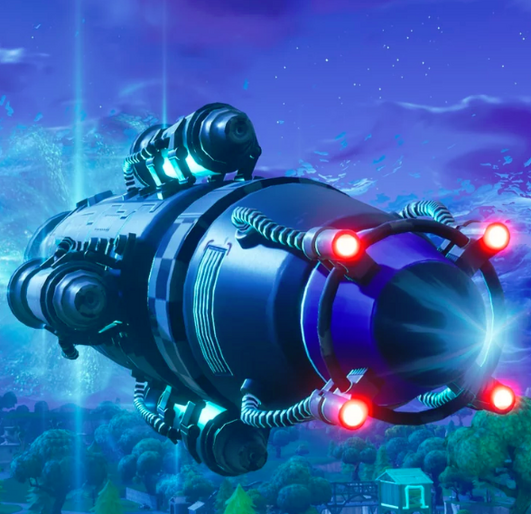 "The Rocket" was a destructive weapon located at the Villain Lair created by the The Visitor. The Rocket was launched on June 30th.

In Season 10/X, a new rocket was created by The Scientist in Dusty Depot. The 2nd Rocket was launched on October 13th 2019.

The Blast Off Event

The rocket started slowly flying into the air after it was launched, But then the booster fell off and landed in Anarchy Acres while the rocket blasted off into the sky. Later players could hear the word "SET COORDINATES." and then the rocket started falling back down to the island, then started rocketing down aiming 4 beams at Tilted Towers which turned into one big beam and then dive bombed on Tilted Towers only for a rift to open up and take the rocket with it. After a little while the rift appeared at Moisty Mire and started flying across Lonely Lodge, Wailing Woods, Risky Reels, Loot Lake and Tilted Towers before it disappeared into another rift next to Greasy Grove, And then appeared into a rift over Loot Lake and started accelerating into the sky and disappeared in a rift in the sky, which lasted for the rest of Season 4 and most of Season 5.

The rocket started slowly flying up into the air after it was launched just like in Season 4, then the booster fell off and The Rocket blasted off into the sky, but unlike before, it went into a rift much sooner after it launched. All the rifts above the rift zones activated. A single rocket came out of the rift over Gotham City, it flew down and turned upwards, flying past Dusty Depot and into a rift over Lonely Lodge. The other rifts over the rift zones created 6 additional rockets that flew around into their own rifts (probably 1 for each of The Seven). They each came out of these rifts, eventually crashing into the same rift. They arrived behind the Meteor and made a rift in front of it. All 7 rockets collided with this rift multiple times, looping around the meteor until it unfroze the singularity and went into the rift. A few seconds later, a rift appeared above Loot Lake and one rocket came out. It pointed a laser at the Zero Point (likely a callback to Season 4's Rocket Launch) and crashed into it, creating a shockwave that knocked players into the sky. Shortly after, a much bigger rift opened up and the meteor, surrounded by the remaining 6 rockets, violently collided with the Zero Point. This ultimately created a much larger explosion and filled the island with stars. A few seconds later, the explosion effect started moving inwards and the Zero Point created a vortex that sucked in the entirety of the game. This includes the island, players, and even menu elements. Players still in the lobby also experienced this. After the event, there was a Black Hole that stuck around for 37+ hours, then Chapter 2 Season 1 began.