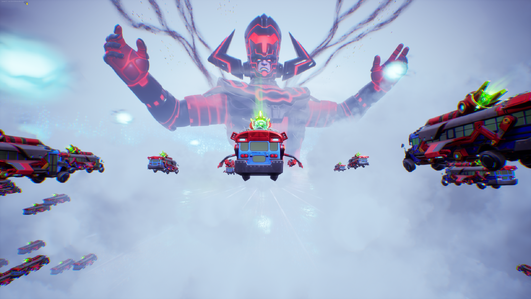 The Devourer Of Worlds event was a Live Event that took place on December 1st, 2020 at 4:10 PM EDT. According to Donald Mustard, Creative Director at Epic Games, this was the largest Live event ever. The event centered around defeating Galactus, as he is known as the Devourer of Worlds.

On November 21st, 2020 the countdown for the event began to appear on the Battle Pass Challenge Table, the main lobby, and the helicarrier as Spawn Island for the season, set to end on December 1st, 2020 at 4:00 PM EST (9PM GMT). During this time, Galactus has suddenly disappeared from the sky after slowly making his way closer to the Island every day. However, he is slowly rising from the distance. At the same time, in the Battle Pass screen, a hologram of Galactus is shown, slowly rising closer to the island as he is seen in the background of the tab getting more visible daily. From November 21st to December 1st, Fortnite's socal medias began teasing the event with several posts. Sometimes, the official accounts of Marvel characters like Thor and Iron Man also replied to the posts.

The Devourer of Worlds Event by ISPuddy
Community content is available under CC BY-NC-SA 3.0 unless otherwise noted.
Advertisement