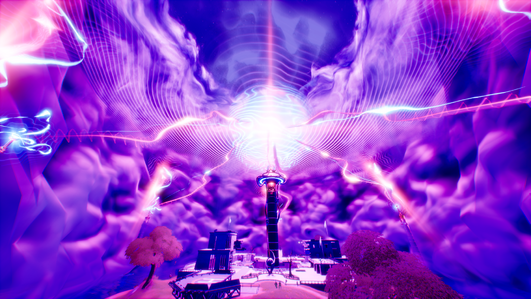 The Device event was a Live Event that took place on June 15th, 2020 at 2:05 PM EDT. This was the first Live Event in Chapter 2 that is related to The Storyline, rather than a crossover event.

On May 23rd, 2020 the countdown for the event began to appear in Midas' Agent Room and in the main lobby, set to end on June 15th, 2020 at 2:05PM EST. Not long before, wires began appearing around the Battle Pass Tab of the lobby. The final wires were added in the Battle Pass Tab, in the lobby, and in Midas' Agent Room. Eventually, the Doomsday Device in Midas' Room began to power up from the wires, gaining more energy up to the event. Midas is most likely using this against the storm, according to files. However, the reason is unknown.

On May 28th, 2020 the countdown timer officially reset back to 8 days in the lobby and Midas' Agent Room. This is due to Epic Games announcing that the season has been pushed back by one week until June 10th, 2020 and the live event pushed back and rescheduled for 6th June, 2020.

On June 13th, 2020, Epic tweeted and teased the upcoming The Device event. The caption in the tweet says: “The clock is ticking, his plan is in place, can the Storm be Broken? We’ll see in two days...”

On June 14th, 2020, Epic tweeted and teased the upcoming The Device event again. This time the caption in the tweet said: “The Storm rages on. Will Midas’ Machine break the Storm? The Device is set to be activated on June 15th at 2PM ET. Space is limited! Show up 30 minutes early to help secure your spot and be there live.”

Once the timer reached zero, Henchmen voices and siren noises could be heard inside of The Agency. From the hatches surrounding The Agency, coils grew out of them facing upwards. Almost all of The Agency exploded revealing the device. It began to rise up from the inside of the agency, until it reached the top. Then, it released waves that altered gravity, making players float. The Device began to power an orb that appeared above it. The coils surrounding The Agency then began to power the orb (that has a striking resemblance to an Eye of the Storm item from STW and is probably an Eye of the Storm) above The Device as it grew larger. The coils began to then shoot at the storm, altering it and pushing it away. All of a sudden, player's screens began to fade to white.

The game switched to first person mode, and players were put inside of an office. The office seems to belong to Jonesy, real name John Jones. In the room are photos hung up on the wall which seems to be his personal life, with a picture showing him with his girlfriend/wife. There are three Top Secret files on his desk, with pictures of Midas, Lynx, and Jules. There is also a computer on his desk showing The Device in action. Players are then sent back to third person as the storm has now fully consumed the map. The Device seems to be harnessing the power of the storm, as purple lightning is then seen striking near it. The Device then changed to a red, then purple color. The Device is also continuing to make the orb above it bigger, feeding it power from the storm. The coils continue to feed the orb power as it then pushes the storm back once more, this time with the storm fighting it to move in the opposite direction. The orb begins to shrink and become a bright yellow color, changing the storm to a red color. It then succeeds, completely pushing the storm out of the island. The orb then disappears and powers down. With the storm gone, The Device turns off and rainbows appear above the remains of The Agency. The Device then lowers itself down into the depths of The Agency, and when it reached the bottom of the agency, rain starts to fall and we are then warped into first person again. This time, we hear talking coming from outside of the office.

"Uh no. E-everything is NOT stable over here. We are act-- Uh, Janice! Janice! Uh, dial the Resonance Actuator to 7.2. Now. Please. Yes, right now."

"Wait, wait, wait, wait. Hold on, hold on... "It's not just a storm?" What does that mean?" Must be connected to the loop, but there's no way we could have predicted that it would react THIS way. At this--"

Players are abruptly taken back to the island as the storm is now a large tsunami surrounding The Agency. In the tsunami, you could see fish, sharks, and The Yacht above the water. Once again, we are then taken back to the first person in John Jones' office.

"And that worked? How long do you think it'll hold? Good, good. Everything is, uh, starting to stabilize here. Nothing seems to be-- ...What the...?"

Jonesy then enters the office, recognizing the player.

Once again, players are taken out of first person. The white screen transitioning takes longer than usual, and unusual, distorted sounds that resembled Midas' voice could be heard. We are then taken back to the Battle Bus, with a tsunami completely covering the island except The Agency, concluding the event.