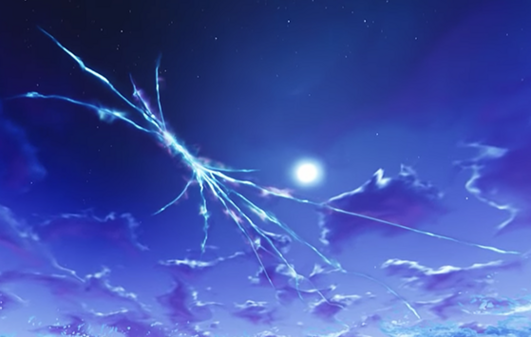 The Crack was a large, Rift like object that appeared in the sky after The Blast-Off Event. For the rest of Season 4 and a large amount of Season 5, the crack remained in the sky, it could not be touched or harmed.

In Season 4, during The Blast-Off Event, the rocket began flying around the map, creating large cracks as it went through space and time. It went from Tilted Towers to Wailing Woods, around to a mountain near the Villain Lair, foreshadowing what would appear there during Season 5. It finally appeared above Loot Lake and shot up at full speed, creating a large crack in the sky before vanishing. For the rest of Season 4, the Crack remained in the sky, slowly growing. However, more cracks began to appear around the map, called Rifts, that would take objects and also place new objects onto the map.

In Season 5, Worlds began to collide due to The Crack along with the Rifts from the rocket. However, the Crack began to shrink throughout Season 5. It began to grow smaller, and more purple then blue. Eventually, the Crack began shooting out bolts of lightning, striking a hill of cacti in the desert. It continued to strike on and on until all of the cacti were gone. It eventually let out a last, longer bolt of lightning, before spawning the CUBE, and vanishing into the sky.

In Season 10, The Visitor had returned, seemingly due to the Zero Point somehow changing time at Dusty Divot, and also changing it. Not only was Dusty Depot back, but the Meteor was above it and the Factory, frozen in the sky. From The Visitor's return, he created machines called Rift Beacons, and placed them across the island. Upon using them, they would change a location into a brand new location, or a similar one, but slightly altered. Once the process was complete, a crack would appear in the sky. The Visitor had done this multiple time, created multiple cracks in the sky, readying for The End Event. Once it started, The Visitor's newly created rocket shot out of Dusty Depot, and went through a crack in the sky. Eventually, multiple rockets appeared from the cracks in the sky, causing the cracks to form into each other. Due to the Zero Point collapsing into a black hole, the cracks were consumed, removed before Chapter 2 Season 1.