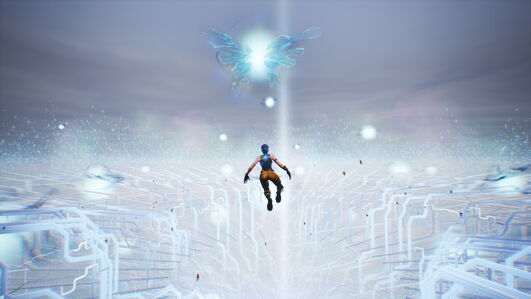 The Bridge is a location which is also known as the In-Between or the Nexus.

It was shown during the Butterfly Event after the players were transported there after the Cube exploded due to the Zero Point Energy (ZPE) it contained. It appeared during The Unvaulting Event, where players were able to use the gateway to enter the vault, which is located in The Bridge. It most recently has appeared in The Devourer Of Worlds Event, where The Zero Point transported Galactus and the players to it after it was destabilized due to Galactus absorbing it.

The Bridge is the official term in the storyline, as it has been mentioned by the Visitor in the Visitor Tapes and Agent Jones in the Chapter 2 Season 5 story trailer. If The Zero Point is ever to be destroyed, the Bridge would go down with it. It is extremely likely that the Bridge is a hub-like area that connects to every single reality to ever exist; including the reality of the several popular heroes from the Marvel Universe, who entered our reality during Chapter 2 Season 4 to stop Galactus.