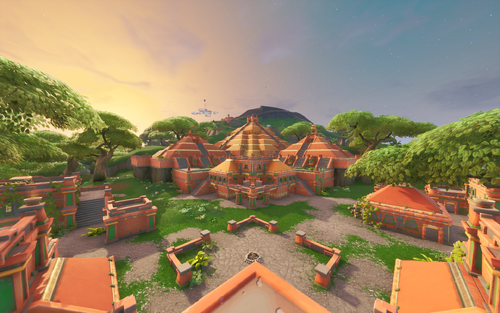 Sunny Steps was a named Point Of Interest in Battle Royale which was added to the Map in Season 8, located inside the coordinates I2 and I3, directly North of Lonely Lodge, northeast of Pressure Plant, and Far East of Lazy Lagoon. It was an Aztec-themed location with a series of colorful orange temples, pyramids, and shrines which replaced half of Wailing Woods. There are also lots of campfires located at this location.

15 Chests that had the potential to spawn.

For more details on houses and buildings, visit Sunny Steps/Buildings

The largest structure in Sunny Steps; a 7-tile high pyramid with deep orange sides and colorful pillars at the top.

4 Chest Chests can be found in the Great Pyramid: One outside at the very top of the pyramid, one in the middle of the center pond, and one at each of the two bottom entrances.

The outdoor area in the center of Sunny Steps with a Cozy Campfire in the center. 2 short walls separate the location from the rest of the jungle.

1 Chest Chest can be found in the roof of the main structure, and another

2 Chest chests can be found on the second floor on either side of the wall.

1 Chest Chest can be found in the center of a room with three stone animal heads with two hidden entrances on the ground floor and one more on the second balcony in front of the upper entrance.

A cluster of three small, overgrown structures to the left of the Courtyard with stone chicken and lizard heads inside.

Another cluster of three less-overgrown structures to the right of the Courtyard with stone chicken and lizard heads inside.

{{{2}}} Chest can be found inside the attic of the nearby pyramid-roofed structure.

The first of two identical smaller pyramids directly beside the Great Pyramid. Topped with a large stone chicken head.

1 Chest Chest can be found behind the large chicken head at the top of the pyramid.

The second of two identical smaller pyramids directly beside the Great Pyramid. Topped with a large stone lizard head.

1 Chest can be found behind the large lizard head at the top of the pyramid.