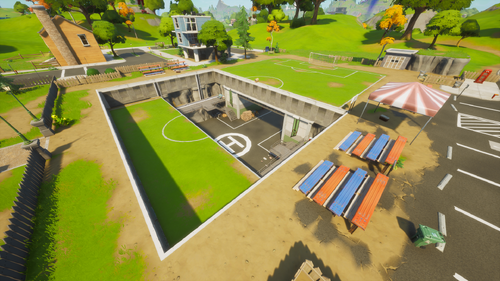 Shadow Safe House - Alpha was a Landmark in Battle Royale added in Chapter 2 Season 2, located inside the coordinate D3, under Doom's Domain, around the southern area under the soccer field. It was a secret underground hideout created by the organization A.L.T.E.R.. Shadow Safe House - Alpha had three entrance points from above, a port-a-potty behind the gas station, a port-a-potty south of the blue house at west Pleasant Park, and a port-a-potty nearby the modern house and east of the soccer field. Doom Henchmen stay in the base, however some keep guard on Doom's soccer field. If they spot a player or are attacked, they will shoot other players in the area, along with reviving knocked teammates. Shadow Safe House - Alpha was easily the biggest safe house that A.L.T.E.R. owned, but probably not the most important since it looks like a storage facility but it has returned in Chapter 2 Season 4.