Season X is the tenth season of Battle Royale which ran from August 1st to October 13th, 2019. The theme of the season was "Out of Time" and was revealed with the (heavily meme-able) story trailer. The orb at Loot Lake exploded, slowly disorienting the time stream of the island, bringing older locations. This was the last season of Chapter 1.

The season featured major changes to the map, such as a giant "frozen" meteor, the return of Dusty Depot and the Factories, giant mech suits, and much more.

Starting from July 28th, Epic Games started releasing a teaser every day until the season starts - with the first one being revealed during the World Cup 2019. The first teaser showed a picture of Dusty Depot, the second showed a picture of the B.R.U.T.E mech suit, the third showed two battle pass skins and the fourth was a sneak peek of the trailer.

The Battle Pass for Season X is a way to earn exclusive in-game rewards by playing Battle Royale. In Season X, you could have bought the Battle Pass for only 950 V-Bucks. The rewards included in Season X were: Outfits, Gliders, Wraps, Harvesting Tools, Pets, Back Bling, Emotes, Sprays, Toys, Contrails, Music, Loading Screens, and more. Some of the outfits during this season were: X-Lord, Titled Teknique, Y0ND3R, Sparkle Supreme, and Ultima Knight.

All in-game items that can be unlocked stay and do not expire. Free Pass rewards are available to all players and purchase is not necessary while Battle Pass rewards are only available to players that purchased the Battle Pass with V-Bucks. A bundle that includes automatic completion of the first 25 Tiers was also offered for 2800 V-Bucks and can be purchased anytime during the season.

At the start of Season X, the ability to gift friends Battle Passes was also introduced. This feature is exclusively available until August 15th, and the first gift you buy will also have a unique gift box for you to use.

Missions are a new battle pass feature; they are series of thematic objectives that grant rewards. As you complete these objectives, you'll earn Battle Stars, XP, and exclusive cosmetic items. More information about Missions can be found in the Battle Pass and Challenges tabs. During Season X, Limited Time Missions were introduced. These are exactly like regular missions but they were only out for a limited time.

Starting from Patch 10.30 of Season 10, players will every now and again be able to vote for which item they would like to come back to the shop. The item with the most votes will reappear in the shop the following day:

Few suits make you feel as powerful as a mech suit does. In this two-person vehicle, players can control its movement while their partner controls its firepower. Those feeling extra adventurous can operate it solo by switching between moving and shooting!

Keep your opponents pinned down at long range with this full-auto sniper rifle.

Unvaulted weapons (these weapons only spawned in Titled Town:)

Unvaulted (only for Sword Fight LTM:)

Heads up! You can now deal with opponents by dropping heavy things on them. With the power of the Rift, summon anchors, cars, and more to fall from the sky.

This is a bubble that’s not easy to burst. Take cover under this dome that’s invulnerable to projectiles and explosives!

This electrifying item is not only shocking in its execution but also in its innovation — it creates a trap that attaches to both sides of a surface!

Save Gotham City with the Batman Grapnel Gun and Explosive Batarang! 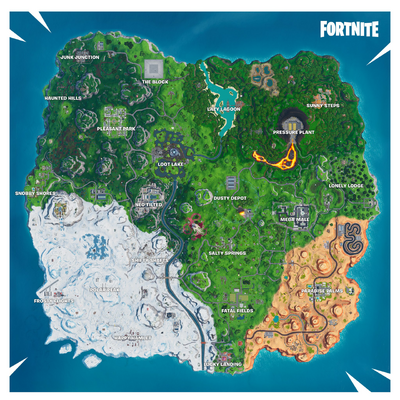 After the black hole caused by the malfunctioning Zero Point, there was only a live video of it. Every so often it would display a series of numbers that corresponds to a word stated by the Visitor, which also creates another piece of dialogue. 11 146 15 62 "I was not alone." 87 14 106 2 150 "Others were outside the loop." 69 146 15 36 "This was not calculated." 2 176 8 160 65 "The moment is now inevitable". Before entering Chapter 2 Season 1 officially, dialogue is shown, stating: "...[initiating sub Loop text transmission]... ...[security encryption M7 authenticated]... The Containment Field has stabilized, The Bridge is intact. ...[redirecting, received]... Surprising is the sheer volume of Matter resolved around the Bridge. Extensive Charting and Analysis are required. Our best [redacted: D4] Team has been scrambled and inserted. We expect resistance. And similar embedded Agents. We've been as quiet as possible. But the gaze of others may now be turned toward Zero. A whole new world awaits."