Season 9 of Battle Royale ran from May 9th to July 31st, 2019. The theme of the season was related around the future, adding many new futuristic areas such as Neo Tilted and the Pressure Plant.

The season features many major changes to the map, including revamps of Retail Row and Tilted Towers, slipstreams, sky platforms and much more.

Starting from May 6th, Epic Games started releasing a teaser everyday until the season starts. The teasers showed off skins from the Battle Pass. Each one also had a futuristic season hint and a letter. Putting the letters from each teaser spells out NEO, a hint about the future and Neo Tilted.

The Battle Pass for Season 9 is a way to earn exclusive in-game rewards by playing Battle Royale during Season 9 and is available for purchase from the Item Shop for 950 V-Bucks. These rewards include: Outfits, Gliders, Wraps, Harvesting Tools, Pets, Back Bling, Emotes, Sprays, Toys, Contrails, Music, Loading Screens and more.

All in-game items that can be unlocked stay and do not expire. Free Pass rewards are available to all players and purchase is not necessary while Battle Pass rewards are only available to players that purchased the Battle Pass with V-Bucks. A bundle that includes automatic completion of the first 25 Tiers was also offered for 2800 V-Bucks and can be purchased anytime during the season.

The 14 Days of Summer event was a Summer themed event that ran from June 25th to July 15th, 2019. Every day a new challenge and LTM would be available - completing that challenge would grant you a free cosmetic item. Additionally, new items would roll out in the Item Shop and a vaulted weapon would be temporarily unvaulted everyday.

Fortbytes are collectible items that can be retrieved either around the map or by completing certain tasks. The design is similar to that of a microchip to match with the futuristic theme of the season.

Various thematic sets including Cosmetic Outfits, Harvesting Tools, Emotes and Gliders were also released on Season 9 as part of the item shop components on daily rotation basis and Battle Pass rewards. New from the Item Shop in Season 9 to all players are Dual Pickaxes and Animated Wraps. Loading Screens are granted from completing Battle Pass Challenges.

Tactics take the day! This robust and precise assault rifle is the ideal option for tight quarters.

Power of the storm in the palm of your hands!

It's not a horseshoe or a hand grenade, but close still counts!

Refresh yourself and allies with this tasty new beverage.

Simple, reliable, powerful. Try out this new take on a classic.

Pick up the beat with this brand new shotgun!

Throw this down to get help from above!

The Tac is back in an all new form. Drop in and try out the Epic and Legendary variants now!

Stay one step ahead of the Storm by scoping in to see its next location!

They say the best gifts are surprises. Open up these Legendary items commemorating Fortnite’s second birthday to see what loot awaits. 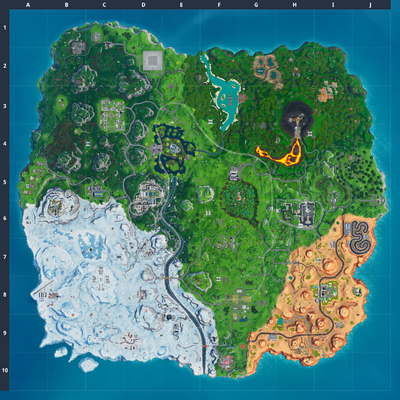