Season 8 of Battle Royale ran from February 28th to May 8th, 2019. A volcano rose up from where Wailing Woods and the Container Yard used to be and covered the northeast part of the map with jungle biome. Pirates also invaded the island and began the events of Season 8.

The season features major changes to the map, including a new jungle biome, a giant volcano, lava, Pirate Cannons, pirate campsites and more.

Starting from the 24th of February, Epic Games started releasing a Season 8 teasers along with riddles every day until the season began. These teasers revealed part of a larger Season 8 poster, (a skull), while the riddles gave us some clues as to how Season 8 would play out.

The Battle Pass for Season 8 is a way to earn exclusive in-game rewards by playing Battle Royale during Season 8 and is available for purchase from the Item Shop for 950 V-Bucks. These rewards include: Outfits, Gliders, Wraps, Harvesting Tools, Pets, Back Bling, Emotes, Sprays, Toys, Contrails, Music, Loading Screens and more.

All in-game items that can be unlocked stay and do not expire. Free Pass rewards are available to all players and purchase is not necessary while Battle Pass rewards are only available to players that purchased the Battle Pass with V-Bucks. A bundle that includes automatic completion of the first 25 Tiers was also offered for 2800 V-Bucks and can be purchased anytime during the season. If you completed 13 Overtime Challenges during Season 7, you would receive a battle pass for free.

Damage enemy locations or structures by launching a cannonball or become a special delivery by launching yourself!

Follow the map to uncover hidden loot across the island! Find the X that marks the spot and get to digging.

Keep the good times rolling! Combine your boost and grapple to perform unbelievable feats with the newest vehicle addition to Battle Royale!

Knock, knock...who’s there? Flint-Knock, that’s who! Pick the perfect time and knock yourself or enemies back with this new weapon!

It's a Poison Trap! Catch your opponents off guard with this new addition. But remember, watch where you step…

It’s Bananas! Regenerate health and zoom around after taking a bite from a Pepper, heal up with a tasty Banana, or relax with a Coconut to gain health/shields.

Archery can be a blast! Nock enemies in a whole new way with this explosive new weapon.

Never give up, never surrender! Bring eliminated teammates back into battle with the Reboot Van. Drop in now and become the hero your team needs.

Become one with the shadows! Engulf yourself in darkness with this new item, becoming invisible to enemies, increasing your speed, and allowing the ability to perform double jumps. 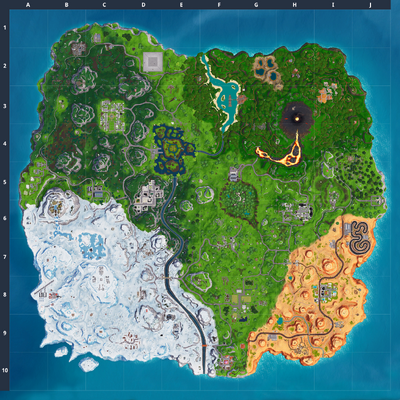