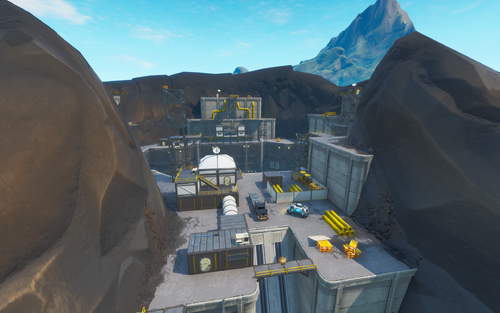 Pressure Plant (Formerly The Volcano) was a named Point Of Interest in Battle Royale which was added to the Map in Season 9, located inside the coordinates H3 and H4, on the now overgrown tip of the former Volcano. Before being removed, it was a giant, government factory with several inside facilities and rooms.

It was located east of Lazy Lagoon, south west of Sunny Steps, northwest of Lonely Lodge, north of Retail Row and northeast of Dusty Depot.

Before June 25th 2019, Pressure Plant was a power plant deep inside of the Volcano's lava, surrounded by several government buildings and other test centres. The helicopter, digsite excavators, and three volcano vents could be found here as well. The helicopter was not a choppa and couldn't be flown.

During Season 9 when the Cattus attacked the Government decided to build a giant robot here to defend the island and converted the location from a power plant to a large assembly area. The robot ( also known as the Mecha or Doggus) successfully defeated the monster with the Singularity statue sword hidden at Neo Tilted.

After the event, Pressure Plant remained in its state and the pit where the robot was constructed is now has huge fans, so if you enter the pit then, you are pushed out and blown away.

Pressure Plant's final version had a total of