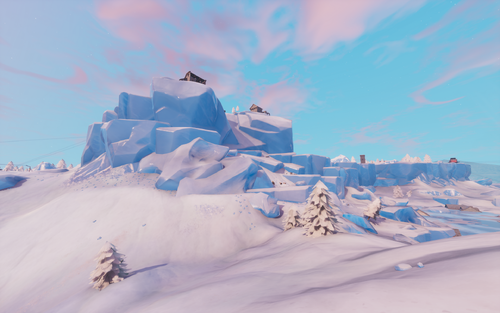 Polar Peak was a named Point Of Interest in Battle Royale which was added to the Map in Season 7, located inside the coordinates C7, C8, D7 and D8, located behind Greasy Grove, northeast of Frosty Flights northwest of Happy Hamlet and southwest of Shifty Shafts. Before v9.20, it was a large iceberg with a castle at the top and a little village surrounding it. The main tower was on the iceberg while two smaller towers were lower down on the iceberg creating a wall. Around the peak, there were smaller towers and campsites. There were zip lines leading to and from the iceberg. It was located northwest of Happy Hamlet, south-west of Shifty Shafts, northeast of Frosty Flights and behind Greasy Grove, which the iceberg had frozen over. Polar Peak had

17 Chests in the original version, but only

6 Chests after the castle got removed and the mountain was destroyed.

During the May 4th The Unvaulting Event, the Volcano erupted a large volcanic rock that cracked Polar Peak severely. Early on in Season 9, the iceberg was cracking even more and occasionally rumbled with ice dust coming off it. A little later, an eye could be seen inside the iceberg which looked at players and made strange noises.

After v9.20, the iceberg collapsed and the main castle crumbled down into pieces. Some of the buildings surrounding it also fell down and the former infinity blade altar disappeared. The eye previously seen inside also vanished, and some footprints appeared near the iceberg.

On June 9th, Polar Peak's castle was occasionally sighted in the water south of the island, being carried by the monster. The monster would come out of the water and re-submerge shortly after.

For more details on houses and buildings, visit Polar Peak/Buildings