This article is outdated. You can help Fortnite Wiki by updating it. 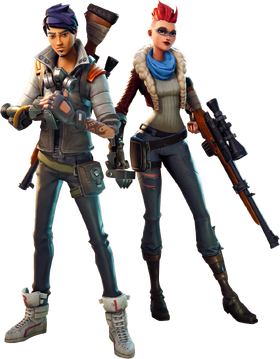 The Outlander is one of the four playable Hero Classes available in Fortnite. They specialize in efficiently harvesting resources, with passive abilities that grant enhanced movement speed or visual cues to the locations of valuable treasure. They also have the unique ability to collect special fragments scattered across maps and use them to power up special gadgets used for combat, such as the

Loot Llama, which can be broken for extra resources. Their favored weapons are Sniper Rifles, Submachine Guns and Pistols.