Outfits are Cosmetic items obtainable in Battle Royale and Save the World. They may be purchased with V-Bucks and earned through the Battle Pass or granted by some unique events or promotions. They are purely cosmetic and do not grant the player any competitive advantage. Outfits are usually referred to as “Skins” by the Playerbase. 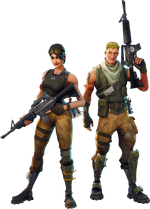 In Battle Royale and Creative modes, any new player will have eight different outfits, the outfits are known as the recruits. The player has no control over which of those characters they play as when using the default outfit, which is determined at random at the start of each play session.

The previous recruit outfits are: Hawk, Headhunter, Renegade and Spitfire.

As seen in the Battle Royale launch trailer, the recruits were the first available skins in the Battle Royale mode when it was first launched in the fall of 2017, and have been available to all players ever since, although some outfits have been removed and added over the seasons. Players can unlock alternate outfits through purchasing on the Item Shop using V-Bucks or through getting it as a reward on Challenges or in Battle Passes. 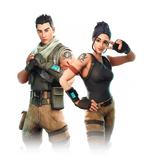