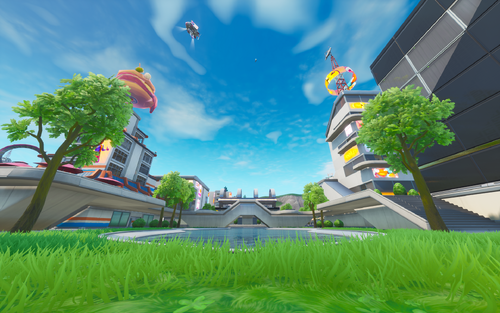 Neo Tilted (Formerly Tilted Towers) was a named Point Of Interest in Battle Royale added in Season 9, located inside the coordinates D5 and D6, southwest of Loot Lake, northeast of Shifty Shafts and Far East of Snobby Shores. It was a heavily modified version of Tilted Towers with new buildings, such as a giant Durrr Burger and hotel, but a similar design to the orignal tilted. Neo Tilted was being powered up from the vault in Loot Lake before the floating orb exploded, stopping time and deactivating the cable.

In the first week of Season 10, a rift beacon was constructed in Neo Tilted that made a rift above the area. This caused Neo Tilted to be replaced by Tilted Town.

For more details on houses and buildings, visit Neo Tilted/Buildings

A futuristic No Sweat Insurance Building from the original Tilted Towers. It was the only building left standing after the volcano, Not many changes to the interior other than a futuristic upgrade.

The Clock Tower has been rebuilt with a holographic digital clock rather then a analog for the futuristic theme of season 9. It also has a shop in the ground floor.

An unknown building that is under construction. The building has a toilet on a plank.

A 9 story high Durr Burger restaurant with office space on the upper floors. The building has a giant holographic Durr Burger on the roof. The top few floors are only accessible by the elevator but since the elevators don't actually work you'll have to use other ways to get up.

a 11-story Skyscraper apartment building that is the tallest building on the fortnite map. The first two floors are a restrant with a balcony over the first floor. A staircase accessed from a separate door leads to the upper floors. The 3rd and 4th floors are offices. There's also two staircases -two per floor- connecting the two office floors. The rest of the floors are luxury apartments with one apartments per two floors and the top 3 floors are the penthouse.