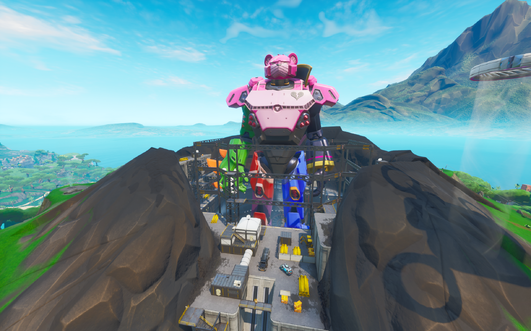 Mecha Team Leader or Mecha was a large robot constructed at the Pressure Plant during late Season 9. Each of it's body parts had a different style, reflecting the pilot, or more possibly Singularity's styles. It was constructed to defeat the Devourer.

Mecha was critically damaged during the fight, but still was able to kill The Devourer with a final blow to his head with the Neo Tilted statue, which turned out to be a massive sword.

Only a few days after Pressure Plant received a upgrade, it was revealed that the government had started to work and build on a robot, to go out and fight the Cattus. Another part of the robot was added every 2 days.

Mecha has an arsenal of powerful missiles. After they seemed to be ineffective he tackled The Devourer and launched both of them in to the ocean. After this failed and he lost one of his arms, he took the Zero Point orb out of the Vault to obtain part of its power (this would crack it; that would tear the space-continuum apart in Season X), he smashed his hand into The Devourer's face in a colossal punch that completely knocked him away. After that he took Neo Tilted's Singularity statue that turns out was a sword, then he jumped up in the air and he jammed it into The Devourer's head, leaving only the Skeletal Remains unnamed POI for the rest of Season 9 and Season X. After that he flossed with his only arm left ( therefore inventing the No Sweat emote) and flew into the sky and disappeared in what seemed a rift, ending the Final Showdown event.