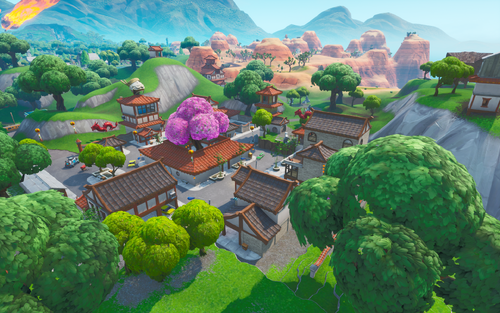 Lucky Landing was a named Point Of Interest in Battle Royale added in Season 3, located inside the coordinate F10, east of Happy Hamlet and south of Fatal Fields. It was a small town with thatched roofs and traditional Asian-inspired contemporary designs, shrines and a pink cherry blossom tree centerpiece. It likely was added to celebrate Chinese New Year 2018. Lucky Landing was the southernmost named area on the map. Lucky Landing had

For more detail on buildings and houses, visit Lucky Landing/Buildings