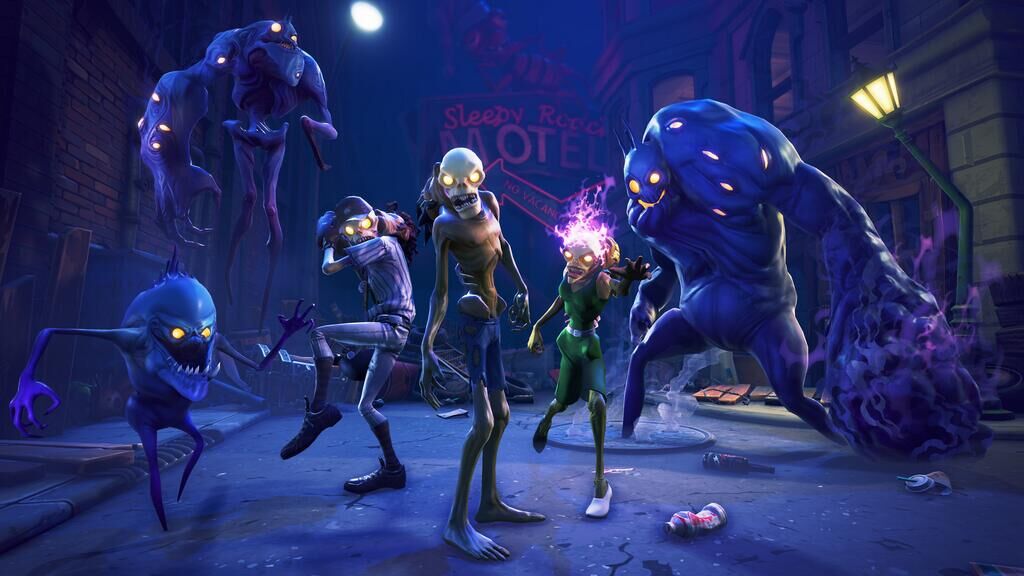 Husks are the most common type of Monster in Save the World. They appear to have once been humans that have been mutated by The Storm. They appear as humanoid monsters wearing what appears to be a "hoodie" but is actually their skin. They spawn from Storm vortexes during Missions, or can be found sleeping out in the world, or can be found spawning from encampments, or spawning from Husk Monoliths, during a dungeon.There are a variety of types of Husks, each with a different appearance and attack pattern.

Husk
The "standard", most common type of husk that the player encounters. They utilize a melee attack using their hands, but deal relatively low damage per hit and have relatively low health. They are individually quite weak and only pose a threat in larger groups.

Husky
Beefier than the standard Husk, they deal moderate damage to players and buildings. They can soak up quite a bit of damage and can take down buildings if left alone for too long.

Chrome Husky
Considerably tanker than Huskies. They tend to revive themselves a number of times after being knocked down when brought to zero health.

Pitcher
Pitchers carry a baseball helmet full of bones, which they throw at the player. They have a slow wind-up that makes their projectiles relatively easy to dodge. They tend not to focus on the objective but instead focus on distracting and damaging the player.

Sploder
Similar in size and shape to the Husky husk, they wear a red shirt and carry a propane tank on their shoulder. When near players or buildings, they will throw their propane tank to do significant damage to all players, structures, and other husks near it.

Beehive
Beehive husks appear as a standard Husk with a beehive on its head, surrounded by a swarm of bees. Occasionally they will stop and send a targeted swarm of bees at a player. Bees will linger on any tile where the Beehive husk has walked or directed bees towards, dealing damage per second to players within the tile. The beehive can be shot off with a head shot, turning them into a regular Husk.

Lobber
Lobbers are the only female husk. They throw purple or orange flaming skulls from a long distance. Purple skulls deal damage on impact to players and structures, while orange skulls linger and deal damage per second to players only. If it is an orange skull, this is a Poison Lobber and if the skulls hit the ground, it becomes a beehive. If you break it, if you are close, it will poison you.

Huskling
Huskling are smaller than a standard husk. They primarily hunt players and can jump over one-tile-high walls to reach the player. They deal moderate damage and come in swarms so they can hurt a player quickly, but they are very fragile, taking no more than a hit or two to kill with most weapons.

Zapper
Zapper husks are ranged attack enemies who fire a single, moderately powered beam at the player and are able to spawn with elemental modifiers. The damage and health of the Zapper Husk is somewhere in between that of the Pitcher and the Blaster.

Riot Husky
Riot Husky carries a refrigerator door that will block most player attacks from the front.

The Nurse is a enemy that heals enemies in an AOE.

Elemental Monsters
These types are Fire, Water, Nature, and Energy. Each element has its own weaknesses and strengths.

Pumpkin Head Husk
These Husks only appear in the Halloween event "Fortnitemares" in Save The World. These are normal Husks but wear a pumpkin on their heads.

Elf Husk
These Husk only appear in the Save The World Christmas event. They are normal Husks dressed as elves.

Mrs Claus lobber
These lobbers only appear in the Save The World Christmas event. They are normal lobbers but are dressed as Mrs Claus.

The Krampus smasher is a Save The World Christmas event reskin of the smasher.

Santa Sploder
These Sploder only appear in the Save The World Christmas event. They are normal Sploders but are dressed as Santa Claus and their gas can is a present.