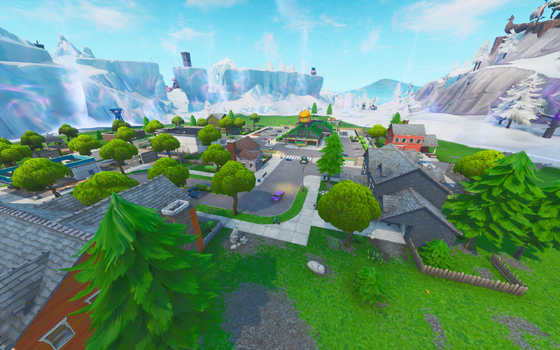 Greasy Grove (Formerly a Frozen Lake) was a named Point Of Interest in Battle Royale which was added to the Map in Season 1, located inside the coordinates B6, C6, B7 and B8, west of Shifty Shafts, southwest of Gotham City, north of Polar Peak and southeast of Snobby Shores. It was a residential neighborhood with a TACOS restaurant, Pass N Gas station, and an Outdoor equipment store.

It returned in Season 10 because of a rift beacon on the 10.30 Patch. However many buildings swapped places and the houses were color coded.

Greasy Grove had the potential to spawn up to

At the start of Chapter 2 Season 5, the Durrr Burger restaurant from Greasy Grove returned and smashed half of Logjam Woodworks. It seems to be s Season 4 - Season 6 version as The Durrr Burger head is still not there. The "Goodbye" sign can also be found here. Beef Boss can be found here.

For more information on houses or buildings, go to Greasy Grove/Buildings.

The TACOS restaurant that replaced the Durrr Burger restaurant.

An Outdoor equipment store, this was the only building that could be accessed while Greasy Grove was frozen under ice, apart from the rooftops of the houses.

A similar Pass 'N' Gas station to ones found in multiple other suburban areas on the map.

A large blue house that can also be found in Pleasant Park and Retail Row but in a different colour.

This house was white before it was removed.