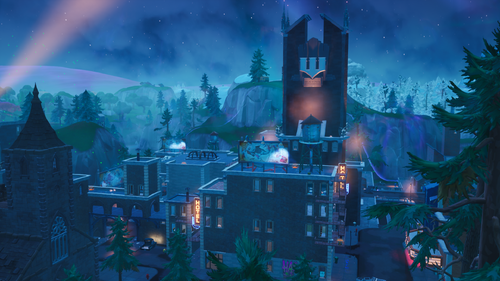 Gotham City (Formerly Tilted Town) was a named Point Of Interest in Battle Royale added in Season X/10, located inside the coordinates D5 and D6, southwest of Loot Lake, north of Shifty Shafts, northeast of Greasy Grove, far south of The Block, far east of Snobby Shores and west of Dusty Depot. It is a large city with many buildings such as a large tower, a destroyed Police Station, a factory complex and more. Additionally, one of the buildings in the POI had a light which shines into the sky and the Batman symbol can be seen.

Like all other rift zones, there is a bubble surrounding the POI. Upon entry of this bubble, all players will gain the ability to redeploy their glider whenever they want.

When you entered the rift bubble, a small overhead message appears on your screen, saying Gotham City: Glide at will.

A factory complex near the edge of the city. A large tub of acidic chemicals can be found in one of the factories, the same one the Joker fell into.

The City Hall with classical architecture and grand interiors, the building has parking in the ground floor, much like the No Sweat Insurance Building in Tilted Towers.

A small Red Building that has a small branch of No Sweat Insurance in the ground floor, along with a convenience store titled: "Emergency". This Building sits on a piece of land that has not been occupied in any other versions of Tilted.

a building a with a small branch of NOMS in the ground floor, the building may be designed to reference the noms in Tilted Towers, as it has the same layout and so does the apartment above.

This building also has a pedestrian bridge connecting it to the Destroyed Building across the street.

An old cinema that appears to be abandoned. This place was where young Bruce Wayne (Batman) and his parents went to see the movie "Zorro" for his birthday. Later that night, Bruce's parents were killed by a gunman in Crime Alley after leaving the theater.

A hotel that has a very similar design to a 6 story apartment building in Tilted Towers, but the upper floors have a different layout and it is only 5 stories.

An authentic gothic Church, this building has the same design as Haunted Hills.

A building that appears to have been one of the victims of an attack on the city.

A crater can be found at the building and it is still on fire, one of the Bat-symbol lights can be found on this building, possibly calling for help for the attack.

The Wayne Tower from the Batman franchise, it is the tallest building in the city but many of the floors appear to still be under construction.

A bank that appears to have been one of the victims of an attack on the city.

It has all of the same destruction features of the other Destroyed Building but was probably hit by intention by the villain for obvious reasons.