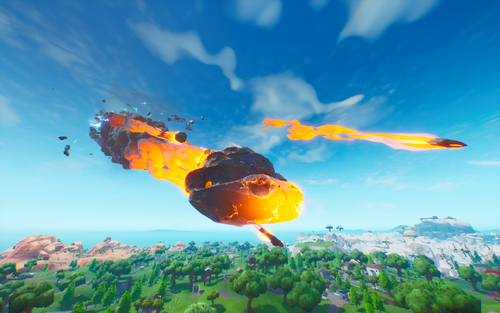 The Frozen Meteor was an Unnamed Landmark in Battle Royale added in Season X/10, located inside the coordinate G6, south of Dusty Depot, north of Salty Springs, west of Retail Row, and directly above the Factory (POI). It was a giant floating meteor that had been frozen in time. Inside of the meteor, there is a opened Visitor pod along with some chests and random holes spread throughout it. Any players on the meteor would get a low-gravity effect and be immune to fall damage. Players soon noticed the meteor wasn't facing the right way. In the season 4 trailer, the meteor was seen heading over Risky Reels and then it struck Dusty. But in Season X, it's facing the opposite direction. This could of been on purpose or on accident.

Due to Chapter 2 Season 1 being released, a new map has also came with it, removing most of the POI's that were on this first map.

The Meteor can now only be found in Creative.