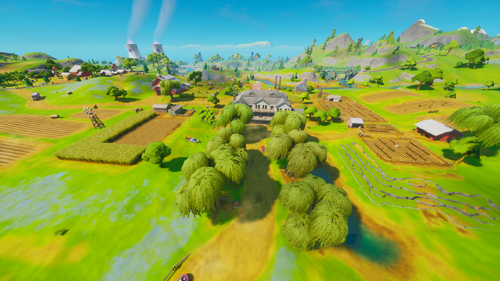 Frenzy Farm was a named Point Of Interest in Battle Royale which was added to the map in Chapter 2 Season 1, located inside the coordinates F3 and F4, located southeast of Craggy Cliffs, northwest of Dirty Docks, and far northwest of Lazy Lake. It is a farm with a massive farmhouse, crop fields, barns, sheds, silos, stables, and scattered trees.

During Chapter 2 Season 4 with the Patch 14.10 Update. Frenzy Farm has been replaced with the Upstate New York landmark and Stark Industries POI.