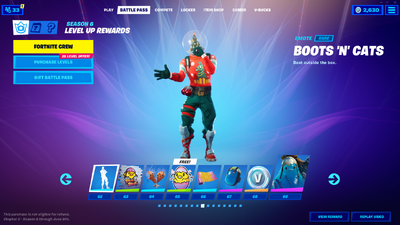 The first main reward for joining Fortnite Crew is free access to the current Battle Pass of the Season. Every season, a new Battle Pass is created, a level based system that rewards cosmetic items every level, which Fortnite Crew members would obtain for free, where it would normally cost 950 V-Bucks. The first season that will be able to be rewarded through Fortnite Crew will be Chapter 2 Season 5.

The Chapter 2 Season 6 is themed with several characters brought to the island across several different realities. The first item that Fortnite Crew members will obtain immediately is Agent Jones, former agent of secret organization the Imagined Orrder. Included in the Battle Pass is an artifact hunter from the reality of Tomb Raider called Lara Croft, a primal hunter who can foresee the past called Tarana, a man with a unique power connected to the CUBE called Raz, a large hatchling on a quest called Cluck, a Teen Titans member from the reality of DC called Rebirth Raven, and a guardian of the structure built over the Zero Point, the Spire Assassin.

The third reward for joining Fortnite Crew is a Monthly Crew Pack. Every month, a new set will be available to be unlocked, which will be exclusive only to Fortnite Crew Members. Each month will reward a different exclusive set, starting on December. Each set will always unlock an outfit and a back bling, and an extra matching cosmetic. December's reward was revealed early to be an outfit called Galaxia. Her set includes the Fractured World back bling and Cosmic Llamacorn.