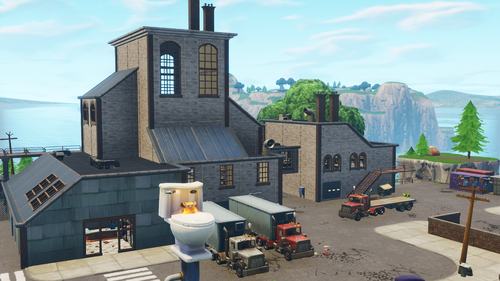 Flush Factory was a former named Point Of Interest in Battle Royale added in Season 1. It is currently located southeast of Slurpy Swamp, and west of Misty Meadows, and was formerly located inside the coordinates D9, west of Lucky Landing and south of Shifty Shafts. It is a large factory that manufactures toilets with warehouses and other machinery.

In Season 7, Flush Factory was destroyed by the iceberg. The ruins of Flush Factory could be found just southwest of the Warehouses.

In Chapter 2 Season 5, it was added back near Slurpy Swamp, brought back by The Zero Point. However, it is now just a landmark named Flushed Building, instead of being a named POI.