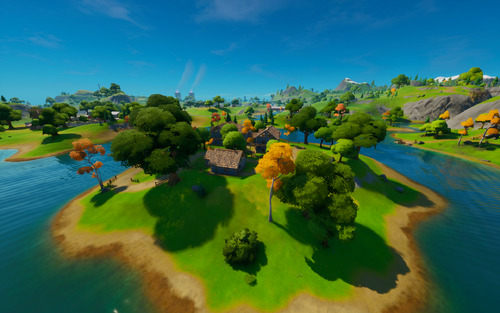 Eye Land (Formerly The Isle Of The Storm) was a Landmark in Battle Royale added in Chapter 2 Season 1, located inside the coordinate D4, E4 and E5. It was a small island in the middle of the main island, which was home to a large house, and a few wooden docks with Motorboats and Fishing Rods.

On Patch 11.10, Eye Land was turned into Isle of The Storm, a Corrupted Area (and a new landmark). The corrupted area destroyed all of the buildings, and added Cube Fragments, Cube Monsters, and glowing vents that have a similar effect to Shockwave Grenades, and launch a player in whatever direction they are facing. Unlike the zones of Season 6, However, it does not have any Shadow Stones. This is the battleground for the Storm King Boss Fight in his LTM in Battle Royale.

The location was removed with Chapter 2 Season 2, having being replaced by The Agency.