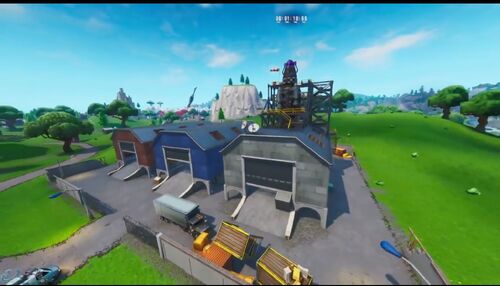 Dusty Depot was a named Point Of Interest in Battle Royale which was added to the map in Season 1, located inside the coordinate F5, south-east of Loot Lake, south-west of Pressure Plant, west of Retail Row, north of Salty Springs east of Gotham City and south of Lazy Lagoon. It was a storage area with three differently colored metal warehouses. One of the warehouses also had a giant rocket and launch pad built inside of it, along with multiple monitors and other technology.

Dusty Depot was partially destroyed following the launch of Season 4, but made a return with Season 10, however colors of the warehouses were swapped. The Blue, Gray, and Red warehouses became Red, Blue, and Gray respectively.

Dusty Depot spawned the least amount of chests of any named location in Season 10, with

At the start of Chapter 2 Season 5, Dusty Depot (kind of) returned again. The Red Warehouse re-appeared but is somewhat damaged. The Blue Warehouse also returned, though is even more damaged.

This warehouse is one of the end warehouses. In Season X, this warehouse was moved from the right edge to the left edge. It was also the only one to fully survive the meteor, and was later converted into Dusty Diner, along with the ruined Grey warehouse.

The Blue Warehouse was completely destroyed by the meteor, originally this warehouse was on the edge, now it is in the centre.

Originally the middle one, the Grey Warehouse is now one of the ones on the edge, it was almost completely destroyed by the meteor and became an observation deck. The Visitor took over this warehouse at the beginning of season 10 and constructed Rift Beacons here. he later made a large launch tower and rebuilt The Rocket here and it launched in The End Event.

Construction of the Rocket