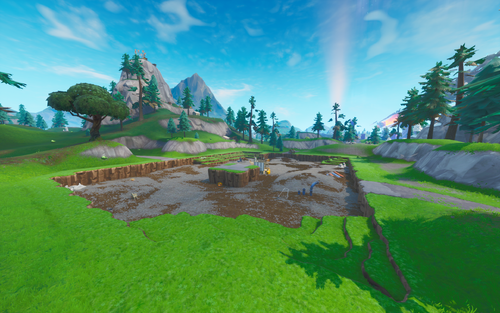 The Destroyed Stadium (Formerly Stadium) was an Unnamed Landmark in Battle Royale added in Season X/10, located inside the coordinate C5, west of Gotham City, east of Snobby Shores, and north of Greasy Grove. It was a small crater in the ground that had a few objects and chests in it, as well as a Vending Machine. Glitched Consumables can be found exclusively in this POI. The Crater was added in the 10.10 Content Update, as a result of the rift beacon at the Stadium exploding.