Choppa was a flying vehicle added in Patch 12.2. It has 1500 HP and can boost like a Motorboat. It has 5 seats, same as the X-4 Stormwing, 4 passengers on the side and a pilot in the Choppa.

Unlike the X-4 Stormwing and the Motorboat, it has no missile or mounted machine gun.

There are weak points on the Choppa, the rotor and the tail rotor, which deals ×2.25 damage to the Choppa. The glass can be broken in the front which also damages the Choppa.

If a player or Henchmen touches the spinning rotor, they will take 50 damage and get bounced away.

When it's health reaches 0, it will instantly explode. The explosion deals 70 damage to players and 450 damage to buildings.

It is currently not available in Creative yet, like the Motorboat.

Unlike X-4 Stormwings, Choppas do not have glider redeploy, so players jumping from flying Choppas will take fall damage unless they land on water. Crash Pads or the Kingsman (Currently vaulted) can be used to negate fall damage.

Like any other vehicle, the Choppa can be healed by a foraged campfire or a Cozy Campfire if they get unvaulted.

As of chapter 2 season 4, the Boogie Bomb can eject players from the Choppa, the player will continue to dance and will take fall damaged if the fall from exiting the Choppa is large enough.

The Choppa has been Vaulted with Patch 15.00, to possibly reduce mobility and the unvaulting of the X-4 Stormwing in Patch 15.10. 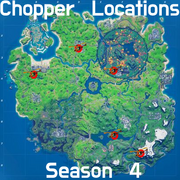 Where to find Choppas in Chapter 2 Season 4