Season 5 of Chapter 2, also known as Season 15 of Battle Royale, started on December 2nd, 2020 and ended on March 15th, 2021. The season started after a long downtime upon the conclusion of The Devourer Of Worlds Event, which took place on December 1st, 2020 at 4:10 pm EST. The season's story revolves around Agent Jonesy recruiting bounty hunters from various realities, to prevent anyone from escaping the Loop through the recently exposed Zero Point.

The Battle Pass for Season 5 costs 950 V-Bucks, and is a way to earn exclusive rewards during the season by earning XP and increasing your level. The rewards included in the Battle Pass include: Outfits, Gliders, Wraps, Harvesting Tools, Back Blings, Emotes, Sprays, Contrails, Music, Loading Screens and more.

Starting on December 2nd with Season 5, players will be able to buy the Fortnite Crew subscription for $11.99 USD a month. The subscription includes access to the current battle pass, 1,000 V-Bucks per month, and monthly sets that are exclusive to the subscription only. For the first month, the Galaxia outfit will be the first of many monthly outfits to be included for the first month, including the Fractured World back bling, and Cosmic Llamacorn harvesting tool.

Quests are a brand new form of challenges this season. There are different types of quests, based on their rarity. The Beskar Quest is one of the quests included, which rewards several styles for the Mandalorian.

Achievements are back in Chapter 2 Season 5. Instead of being colored red, it is colored purple. Several of the Achievements are similar, but there are new additions earned through the season's new mechanics, items, and cosmetics.

Various thematic sets including Cosmetic Skins, Harvesting Tools, Emotes and Gliders are also to be released during Chapter 2 Season 5 as part of the item shop components on a daily rotation basis and Battle Pass rewards.

Save up those bars because the fire-loving Blaze has been equipped with an Exotic-class weapon for sale, the fiery Dragon's Breath Sniper.

Blow 'em away! The new Lever-Action Shotgun is no peashooter - One well-aimed blast is enough to drop even the heartiest foe.

Look out below! Get the drop on your opponents with the new Exotic-class weapon, the Hop Rock Dualies.

The forest is moving... Something's out there! Stalk closer to your opponent using the Predator's Cloaking Device.

Hope for the best with the destructive Burst Quad Launcher or splash your injured allies with the Chug Cannon!

March 9th: The price for the Exotic weapons was lowered: 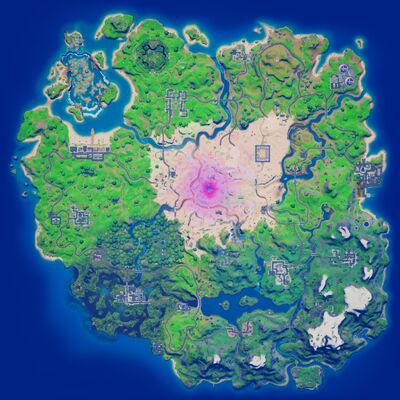