Season 2 of Chapter 2, or Season 12 of Battle Royale began on February 20th, 2020 and ended on June 16th, 2020 (originally April 29th, June 3rd and June 10th). The theme of the season relates to the two major groups, Shadow and Ghost, along with the theme of gold and spies.

The map was updated to include five different spy "hideout" POI's, all of which have henchmen patrolling the area. In addition to the henchmen, each new POI includes an AI boss of the Battle Pass skins, which drop Mythic versions of weapons upon defeat.

The Battle Pass tab was remade to resemble the Save the World screens, with the interactive screen being a spy hideout.

Starting February 17th, Epic Games released a daily series of teasers that hints about the upcoming theme of the season.

Beginning daily on February 17th into February 18th, at a certain time, players when returning to the lobby would see the Fortnite News, but it would be glitched or corrupted, and it would glitch to the final teaser for that day. In this case the gold face with chaos agent’s mask in front of it.

On February 18th into February 19th, players were shown a similar screen, but would instead show gold nuke saying the word “KA-BOOM” on it.

On February 19th into February 20th, players were shown the same screen, it showed a gold familiar cat called “Agent Meowscles”. Interestingly, the cat's head is similar to one shown in the Feline By Design Loading Screen.

One thing to note is in teasers 4, 5 & 8 it spells MIDAS. Midas is the name of at least three members of the royal house of Phrygia. The most famous being called King Midas is popularly remembered in Greek mythology for his ability to turn everything he touched everything into gold. This came to be called the golden touch, or the Midas touch. This is why all the teasers are gold. As the theme is typically hinting us to a golden type season.

Before the season started, users on both the r/FortniteBR subreddit and the official Fortnite discord server began to be "activated" by a bot known as "The Agency".

The Battle Pass for Season 2 costs 950 V-Bucks, and is a way to earn exclusive rewards during the season by earning XP and increasing your level. The rewards included in the Battle Pass include: Outfits, Gliders, Wraps, Harvesting Tools, Back Blings, Emotes, Sprays, Contrails, Music, Loading Screens and more.

The Battle Pass tab has been reworked and is now an interactive spy hideout that includes the Battle Pass itself, challenges, and upgrade vault, and more. The pass itself includes new features never before seen, such as rideable gliders and a fully customizable skin. Fitting with the theme of the season, each skin (excluding Gear Specialist Maya and Agent Peely) has a selectable style which is permanently chosen, either Shadow or Ghost.

In addition to Agent Challenges, Gear Specialist Maya had challenges as well, called Maya's Challenges. These challenges were unlocked mostly weekly, each challenge giving the availability to change a certain design of Maya. These Challenges are available until the end of the season.

On April 21st, Travis Scott's Astronomical Challenges became temporarily available due to the Astronomical Event soon to begin along with a large set of Travis Scott items later being introduced in the Item Shop. The challenges consist of most tasks to complete north of Sweaty Sands. The rewards consist of a loading screen, a banner, and a spray and emote. These challenges were removed on April 26th.

On April 30th, the Location Domination Challenges became available. The challenges work in a similar way to the Stretch Goals Missions from Chapter 2 Season 1. Each challenge consists of completing a unique task at specific locations, and the reward consists of XP, where each stage grants more XP than the last stage. The challenges are available until the end of the season.

On May 26th, the Storm The Agency Challenges became available along with the Lone Shadow set. The challenges are mostly based on the agency and other spy bases, with the rewards consisting of a harvesting tool, a wrap, a glider, and XP. Due to recent season delays, the challenges will temporarily stay available until the end of the season. This is the last challenge set of Chapter 2 Season 2.

Achievements have returned from Chapter 2 Season 1, and work largely the same. Instead of being colored blue, they are now colored gold. Many achievements from last season were remade as separate achievements, with only a simple name change, however many are new to this season.

Various thematic sets including Cosmetic Skins, Harvesting Tools, Emotes, and Gliders were also released during Season 12 as part of the item shop components on a daily rotation basis and Battle Pass rewards.

It's not a Fortnite Helicopter, it's a Choppa! 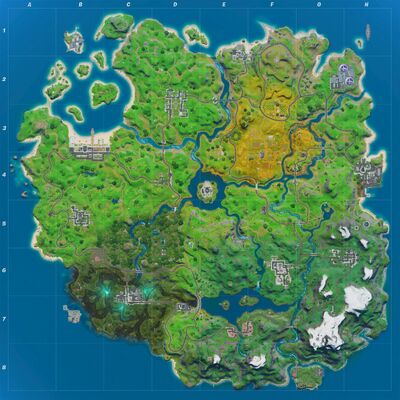