The CUBE, referred to as the "Six-Sided Mystery" but more commonly by the community and Epic Games as Kevin the Cube, was an unknown phenomenon during Season 5, Season 6 and Season X. It was first created by the Sky Rift on August 24th, 2018, on the plateau where the continuous lightning strikes from the Sky Rift had been destroying cacti placed in a circular formation on top of the plateau, at coordinates H9. Being near the CUBE granted players 1 shield point every 2 seconds.

The CUBE acted like a bounce pad from all sides, bouncing players back when touched (or pickaxed), and struck the player with lightning bolts when shot, which dealt 30 damage, disregarding any shields. Getting eliminated by the CUBE’s lightning bolts, dying to fall damage from its knockback effect or getting smashed and crushed by the CUBE itself showed a message in the Kill Feed that said "(Player) got too close to [rapidly flashing Rune symbols]". Any dynamic entity, including players, Shopping Carts, ATKs, and Quadcrashers could be knocked back by touching the CUBE. It also destroyed many map objects and could eliminate players if they were under the CUBE when it rolled during Season 5. The CUBE did not block fall damage, despite it's bounciness.

The CUBE was also one of the only entities in the game that didn't have a health bar, meaning it couldn't be damaged or destroyed by any means. However, it has been known that the CUBE could be destroyed with an X4-Stormwing upon collision, probably because Planes and the Cube were never in battle royale at the same time, so there is no special interaction for Planes hitting it and it defaults to the plane destroying objects on contact. This can only be done in Playground and Creative modes.

Shortly after its creation, the CUBE started to move by rolling, on various intervals. Being in front of it while it was rolling would cause players to ether be crushed, or glitched under the map, resulting in death. Every so often, the CUBE stopped on a certain point on the map, created a large anti-gravity field that gave a similar effect to Hop Rocks, and begun to "imprint" a rune on the ground. The CUBE imprinted seven different runes on the map, each taking 24 hours to complete.

Mobile App users need to view this page in a browser to use the map fully.

After printing 7 runes, the CUBE made its way towards Loot Lake, but not before going through Tilted Towers and destroying half of its newly completed building. Finally, when it rolled into the lake on September 19, 2018 at 4 P.M. EST, the CUBE dissolved into the lake, thus making the water surface in the lake bouncy, exactly like the former CUBE. Shooting at the lake didn't cause lightning bolts to hit you, and you couldn't get shields from it anymore.

The CUBE was last seen floating in between the destroyed Floating Island fragments during the Fortnitemares (2018) event. It acted like it did before falling into the lake, but it no longer gave shields to players.

At the start of Season 6, the CUBE attached itself to the island at Loot Lake and started to float away to the Corrupted Areas. It went to the runes and absorbed their power. The cube grew each time this happened into the house. It eventually brought all of the runes together to absorb their powers turning the growths pink. Later on, the Floating Island went back to Leaky Lake to create portal in the sky which grew. 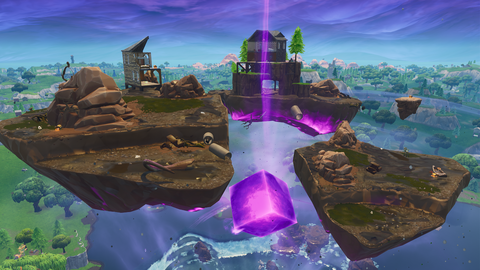 At the start of Fortnitemares (2018), the CUBE gave off a massive explosion, causing the Floating Island to break into 3 big pieces and 3 smaller ones leaving the CUBE exposed. The cube growths mentioned previously scattered to the corrupted areas. These and smaller ones, summoned from portals, spawned cube monsters. As the portal continued to strike the CUBE, the CUBE started to develop cracks. Eventually, the cracks became bigger and, slowly losing its energy, it started to leak and drip a purple substance into the eye of the whirlpool below. At 1 P.M., on November 4th, it spun rapidly and exploded, taking every player on the map into The Inbetween, where a rift butterfly appeared, taking the players back to the Fortnite island, and Leaky Lake, which was now a peaceful meadow-like area. The CUBE stood broken as a Stonehenge-like structure on the middle island of the lake, but was removed as of the Pre-Unvaulting event.

The only 2 nods to the CUBE during this time were prefabs of it that can be found in Creative, and 2 memorials located where it was spawned and where it “died”.

A CUBE from an alternative timeline showed up via a rift beacon in Fatal Fields in its floating island phase, carrying the Motel with it. It had also started to regularly move around the map just like its original counterpart, but with no corrupted areas, its intentions were unknown. Later, however, it was realized that the Floating Island served as a clock for Season X, making a circle around the the map. It eventually returned near Fatal Fields on the final day of the season.

In Chapter 2, Season 1, the CUBE cannot be physically found on the map. However it is now the main icon of, and powering, the new Steamy Stacks POI, which is a power plant owned by Kevolution Energy. The CUBE is not visible in game, but may be hidden in an area of the facility that can't be accessed in game. This location may end up being significant to the story as a result. In front of the plant is a small statue of the CUBE, Similar to the ones at the Kevin Memorials, but colored like the CUBE. It can be destroyed for metal.