Medium Bullets. It is available in Common, Uncommon, Rare, Epic & Legendary and Mythic

The Burst Assault Rifle's Common, Uncommon and Rare variants were first vaulted in 7.10 Content Update #3, then the Epic and Legendary variants in Patch 7.30.

The Burst Assault Rifle was Vaulted due to the weapon being relatively useless due to the existence of other various assault rifles, players rarely using the weapon, and to clear space for the Infantry Rifle.

All 5 rarities were unvaulted in the initial release of Chapter 2, Season 1. With some changes, The original Epic and Legendary Burst, (The Famas, as it was known) was now, Common, Uncommon, and Rare. And the Epic and Legendary Bursts, were made to resemble an “AUG” type weapon. The firerates of the Burst ARs also was buffed to 4.91 in the same patch. As of Patch 13.00 the Burst Assault Rifles fires two rounds rather than three and is available in Mythic form. Its magazine size was also decreased to 20 (except for the Mythic variant) and its damage was increased to 31/32/34/36/37, depending on rarity.

In Patch 13.20, the Mythic Ocean's Burst Assault Rifle's damage and structure damage was increased from 37 to 39, the reload time was decreased to 2.2, and it has slightly less recoil.

All of the remaining variants of the Burst Assault Rifle have been vaulted with Patch 15.00, replaced with the Tactical Assault Rifle and Heavy Assault Rifle. Thus making the weapon exclusive to Creative, but is still remained unvaulted along with it's Mythic variant on iOS and macOS since those devices are stuck on Patch 13.40.

People that are stuck on Patch 13.40 can still get this weapon.

Back then, the Burst AR was firing in bursts of 3 bullets.

" It eventually got vaulted in Season 5 however. 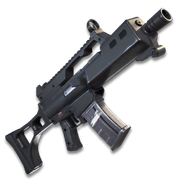 Example of a G36C-inspired weapon in Save the Word: the Razorblade.