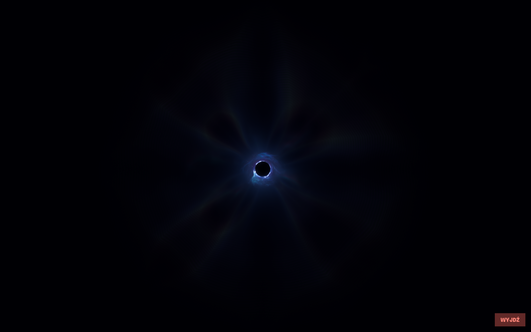 The Black Hole was a region of space time exhibiting gravitational that appeared during/after The End Event. It appeared when the Frozen Meteor smashed into the Zero Point causing it to collapse into a black hole, and suck the whole game into it. If you missed the event and you were stuck in the lobby, the lobby would've also been effected, with the Black Hole sucking it in as well. If you logged in again after this, you would go to the login screen, then an error message would appear, and the login music would slow down and become more distorted until the black hole appeared again, destroying the X in the background and sucking up the lobby. After The End Event, the Black Hole appeared. You couldn't do anything to get rid of it, it was just stuck on your screen. The Black Hole stuck around for 37+ hours, then the Black Hole vanished, then Chapter 2 Season 1 started.

Over time, there were 18 numbers that appeared around the Black Hole. The numbers were 11, 146, 15, 62, 87, 14, 106, 2, 150, 69, 146, 15, 36, 2, 176, 8, 160, and 65. When put into comparison by the number of words in all of The Scientist's recordings from the Season 10 Out of Time Challenges, it states "I was not alone, others are outside the loop, this was not calculated, The Nothing is now inevitable". Also during this state, if you were to enter the KONAMI code (UP UP DOWN DOWN LEFT RIGHT LEFT RIGHT B/CIRCLE A/X ENTER/MENU/OPTIONS/PLUS), you would be able to play a mini-game that replicates the arcade game seen in the Season 9 trailer. The mini-game was previously playable during the Fortnite World Cup live streams in-game.