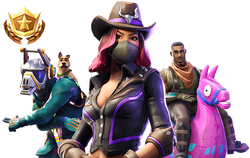 The Battle Pass for Season 6 ran from September 27th, 2018 until December 6th, 2018. Currently, you can no longer earn any rewards/complete challenges from Season 6 as that season has ended.

Tiers represent the progress in the Battle Pass and the Season Levels represent the time playing during current season. Battle Stars are required to unlock certain tiers and earn rewards while XP in matches of Battle Royale matches are needed to reach higher Season Levels and earn Battle Stars. Battle Stars can be collected by; earning XP to level up, completing daily challenges, completing weekly challenges or buying tiers with V-Bucks.

Battle Pass rewards are worth over

25,000 V-Bucks and can be typically attain within 75 to 150 hours of play. Purchasing the Battle Pass will instantly unlock two exclusive outfits; Legendary Calamity and Epic DJ Yonder. Exclusive rewards including emotes, cosmetics and the new Battle Pass music and pet rewards can be earned each time on leveling up. Battle Pass rewards are all cosmetic items that do not affect the gameplay.

On a daily basis, a challenge will be assigned to all players which can be stacked up to 3 at a time. Completing the Daily Challenge will reward with XP and Battle Stars. Weekly Challenges are sets of unique challenges given to Battle Pass owners that unlock each week during Season 6. Completing these challenges will reward with significant amounts of Battle Stars designed to unlock higher tiers. Although players are able to complete some of the challenges each week's set, owning the Battle Pass is required to be able to complete all of the challenges.

Achieving certain amounts of XP and completing weekly challenges during Season 6 will unlock Reckoning and a number of additional styles for the Calamity outfit.

Achieving certain amounts of XP during Season 6 will unlock number of additional styles for the Dire outfit.

Completing 7 sets of weekly challenges will unlock the mystery outfit. Also rewards Loading Screen upon completion of each sets of challenges.

When a Hunting Party Challenge is completed, hidden

Battle Stars and Banners will appear on the map at the location hinted by the challenge's reward Loading Screen. Interacting with the hidden