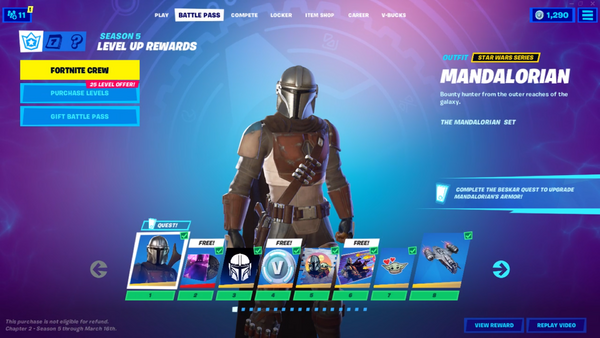 The Battle Pass tab once again only featured the special rewards to be collected during the season, unlike the previous seasons which had a large hub. Upon purchasing the Battle Pass, or purchasing Fortnite Crew, Star Wars Series Mandalorian was instantly rewarded. This season was the first to have a Battle Bundle to be purchased anytime throughout the pass, (apart from level 75 onwards) instantly rewarding 25 levels. Upon purchasing the Battle Boost from Level 1, Epic Reese was also instantly rewarded. There were two Level 100 Rewards for the season, the first being a Star Wars Series Series Pet called The Child, as well an extra style option for the Mandalorian.