Chapter 2 Season 4 is the fourth season of Chapter 2, and the fourteenth season of Battle Royale. It is a 100-level battle pass containing at least 100 cosmetic items, which is 950 V-Bucks, or 2800 V-Bucks if the Battle Bundle is bought, rewarding the first 25 levels. Due to the Mega Drop that happened shortly before the start of Chapter 2 Season 4, it would cost less to get the V-Bucks required. The Battle Pass for Chapter 2 Season 4 ran from from August 27th, 2020 to December 1st, 2020. However currently, iOS and macOS users cannot access this Battle Pass. 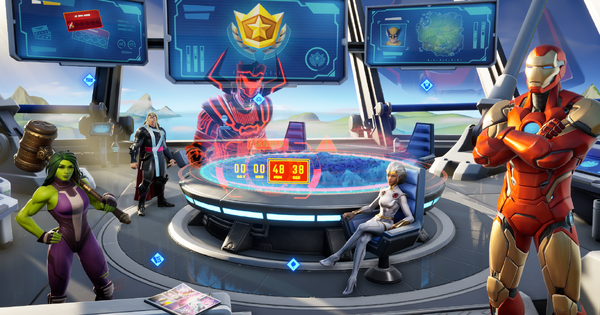 In Chapter 2 Season 4, the Battle Pass tab changed into another different type of interaction menu, still featuring different sections for Battle Pass rewards and challenges. The location is now a room in a flying helicarrier from Marvel, where most of the Battle Pass skins hang around at during the season. 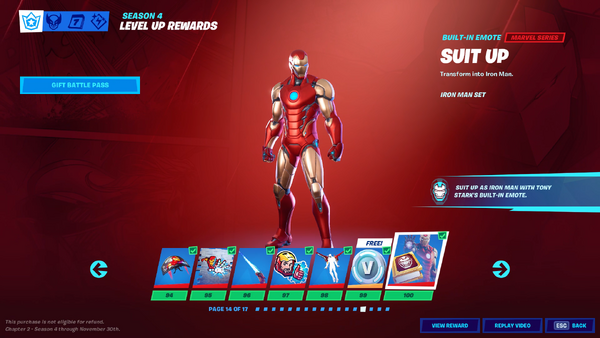 Starting on October 13th, the challenge table was slightly updated, featuring a tracking system of Galactus, the main focus of the season. As he gets closer to the island, the challenge table shows Galactus growing in size. On November 3rd, the challenge table has been updated again. It blinks rapidly with a an ! and a X above the map, indicating that Galactus is getting very close. On November 18th, the table suddenly stopped blinking and giving the warning, since Galactus has suddenly vanished. On November 21st, a timer was added to the side of the table, set to end upon the start of the season event. Shortly after, a hologram appeared beside the table as Galactus. He is slowly peeking above the table, while Galactus can hardly be seen in the distance of the Battle Pass tab. Every day, the hologram rises up farther, while more of Galactus can be seen in the distance.

The Wolverine Challenges section involves, as it states, the challenges that can be completed that are related to the Wolverine outfit. The section leads to the same Wolverine rewards section that is grouped with the Level Up Rewards and Weekly Challenge Rewards. On the start of the season, the first challenge was unlocked to earn the first cosmetic of the Wolverine Set, and the rest will be unlocked weekly, until September 30th, where the remaining cosmetics, as well as Wolverine and his built-in emote to use his adamantium claws, will be available to unlock.

The Punch Cards section involves 64 Punch Cards that can be discovered and punched out throughout the season. Every card is unique and grants a different challenge, such as getting a certain placement multiple times, winning different modes, and harvesting materials. Each challenge can have different levels to it. Some Punch Cards have levels with the same challenge, only it gets more difficult over time. Others can be completed in any random order, as the parts of the challenge are different.

The Comic section involves the same comic book that appeared at the end of Chapter 2 Season 3. By interacting with the comic, it opens into the story of Thor, Galactus, and Marvel. The story tells about how the world devouring creature named Galactus goes on the search for five powerful planets with the assistance of Thor to combat against a source that threatens their reality. However, among their journey, they encounter a rift that Galactus seeks for infinite power. However, Thor goes ahead to the Island to attempt to warn the people. He arrives on the island, only to lose his memory and ends up in a large battle against Fortnite characters. However, he quickly glimpses upon Galactus getting closer and shortly remembers what he was doing. He calls for aid from Sif, who sends Marvel heroes onto the Island. However, they all lose their memory and must regain their memories and powers before the Devourer of Worlds arrives to the Island. Two pages were added to the beginning of the comic, but they are only for the title page, which was teased in scraps daily before the season started, and the names for those who helped create the comic.