Chapter 2 Season 3 is the third season of Chapter 2, and the thirteenth season of Battle Royale. It is a 100-level battle pass containing over 100 cosmetic items, which is 950 V-Bucks, or 2800 V-Bucks if the Battle Bundle is bought, rewarding the first 25 levels. 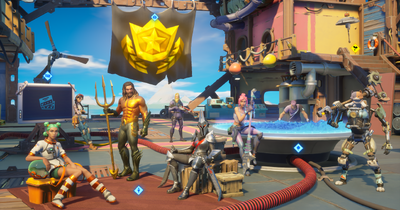 In Chapter 2 Season 3, the Battle Pass tab has been changed into a different kind of interactive menu with multiple sublocations, including the Battle Pass rewards and Challenges. The location is a player's personal fortilla, where most of the Battle Pass skins hang around at during all of the season.

The undisputed king of the sea.

Far from home, the journey must continue.

The fight's not over until I say so.

Jonesy of the deep!

Engineering perfection with a mysterious twist.

Proudly following in his father's pawprints.

A wanderer in a lost world.

The Build-A-Brella section is where the Brella can be upgraded and customized to a player's choice. The choices consists of up to ten different parts of the Brella that can be changed. In order to have a chance to pick the choices, players must complete the requirements to pick the choices. Five choices can be unlocked within a level of the Battle Pass. The other choices must be completing through challenges that become available around every week. However, once players choose a style for the Brella, that style cannot be changed back, and also cannot change to anything else. The choice is permanent.

The Comic section is a section added near the end of Chapter 2 Season 3, on August 22nd. By interacting with the comic, it reveals a comic book referencing a new comic book about Thor. On the day of it's addition, two pages were added and available to read, two released every day until the season ends. The comic told the story about Thor, Galactus, and what's upcoming for Fortnite. Items and objects referenced in the comic have started to show up in game, such as a rift in the sky, and a dropped hammer inside a newly made crater.