Fortnite Wiki
Register
Don't have an account?
Sign In
Advertisement
in: To be finished, Battle Royale
English 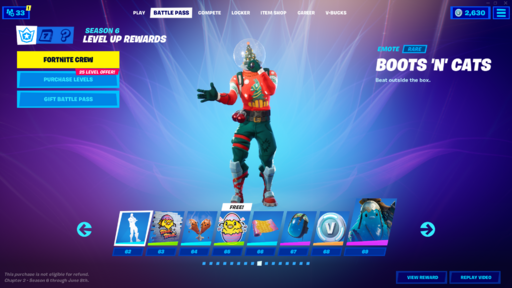 The Battle Pass is a system implemented in Battle Royale to reward players for playing during a pre-established length of time known as a Season. The Battle Pass has its roots in the progression system established in Season 1, although the Battle Pass itself was not formally introduced until Season 2.

There are two editions of the Battle Pass, one that is freely available to all players and one that is available to purchase in the Item Shop. The latter is the proper Battle Pass, with the free component being noted in game as the "Free Pass". Despite this distinction, the Battle Royale community at large frequently uses the term "Battle Pass" to describe both components together along with the current season as a singular entity, e.g. "Battle Pass Season 3" frequently represents all of Season 3 content. Starting with Chapter 2 Season 1 the "Free Pass" "Battle Pass" have been merged together. Now certain items in the Battle Pass are free however Free Battle Pass owners can't go past Level 100

(V-Bucks). There is also a premium option called the "Battle Bundle", which gives you a 25 level head-start for as many as 2,800

(V-Bucks). You can also purchase tiers for the Battle Pass for 150

V-bucks. This offer however is not available to Battle Pass owners who have a season level higher then 75.

You also can get a free Battle Pass when purchasing the Monthly Crew Pack. If you already own the Battle Pass for the current season, you will be given 950

In the Battle Pass iteration for Chapter 1, player progression was measured in two values that correlated with one another. The first was Season Level, which was raised through the accumulation of Season XP

. The second was Battle Pass Tier, which was represented by the accumulation of Battle Stars

The Battle Pass in Chapter 2 was remodeled, removing Battle Stars

, and merging the two leveling systems together, changing the use of Season XP

. In order to tier up in the Battle Pass, XP must be accumulated through challenges, and what was previously your Season Level is now your current tier as well.

The following is a table representing the correlation between Season XP and Season Level:[1]