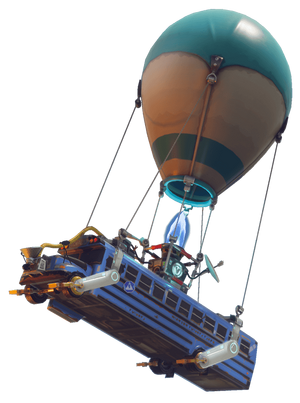 The Battle Bus is the bus in Battle Royale. It is a modified bus that flies over the map using a balloon on top of it that had a Vindertech logo on it. The bus looks like a school bus but is blue and says "Battle Bus" on the back rather than school bus, and there appears to be a party going on inside.

It is possible to thank the Battle Bus driver by pressing your emote bind, while riding the bus. On PC it's set to "B" by default.

The Battle Bus and Supply Drops have been decorated to celebrate #Fortnite1st.