New Season, new Battle Pass. One hundred levels, over one hundred new rewards. Throughout the Season, you’ll meet new agents at the Hideout. After completing their Weekly Challenges (which are available to everyone), they’ll present you a choice of two sets of Battle Pass Challenges to help them with. Your choices will impact each agent’s future... permanently. And no matter what side you turn them to, their future cannot be reversed. Choose wisely! Find out more information on this Season's Battle Pass here.

Explore new points of interest, such as The Agency or The Yacht to obtain Exclusive Weapons and Items! 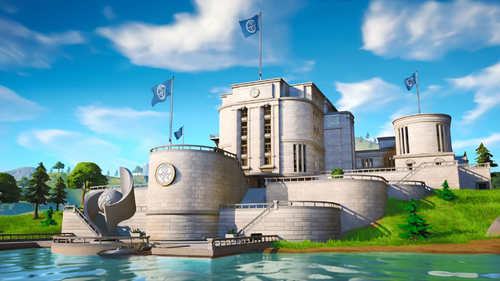 New A.I were added named Henchmen that act like the Stormtroopers. The Henchmen are found within the new POIs. Each POI has a new exclusive Mythic weapon, eliminate the Agents (TNTina, Skye, Midas, Meowscles and Brutus) to get them!

“Recruits! We have a Love Storm incoming!”  - Major Oswald

Major Oswald will not allow Homebase to suffer at the hands of the enemy - the dreaded Love Storm. Operation Broken Hearts begins at oh-eight-right now. Defeat Homebase’s most prominent enemy to unlock Stoneheart Farrah.

Major Oswald’s Wargames drills are back and in full effect! Revisit your Storm Shield bases and test your defences against some destructive and challenging simulations. Complete both daily and weekly quest to earn your haul of Event Tickets, Gold, Banners, Evolution Materials, and PERK rewards.

Make the Husks Lovestruck with this new bow! Keeping the bow drawn past max charge will fire an arrow that stuns the enemy for 10 seconds. Weapon damage will break this effect. Does not affect Bosses or enemies that have recently been Lovestruck.

The might of the Dragon weapons and Chinese New Year Heroes .. Crammed into one tiny Llama. Grab them before this Llama blasts out of the store in the v12.10 update. Both Lunar and the new Llama will cost 500 Lunar Tickets. Use them or save them, the choice is yours!

Note: 2 of these were granted for players who were impacted by the early Winter Llama conversion and any remaining Snowflake tickets have been converted into additional Lunar Llamas.

“The Storm is starting to throw some new mixes of enemy waves at us, Commanders. I fully expect each mission you embark on to have varied Husk encounters going forward. We're also seeing reports that the Nurse Husks are making their way into Plankerton, Canny, and Twine. Stay vigilant!

Smashers can’t live with ‘em... Definitely can live without ‘em. It seems like they aren’t charging until they are a little closer to our structures. Best use that to our advantage!

Finally, some good news. Field reports show that ‘Sploders are running low on propane, and their blasts are dealing less damage to our structures!

“Some of our schematics needs some major tune ups, so time to fire up the forge!

We’ve made some serious enhancements to many ranged weapons. Most notably shotguns, snipers, bows, grenade launchers, and some of our older weapons. These weapons should be much more powerful now.

Speaking of Bows… I’ve tightened their strings so their projectiles should travel faster than ever. I’m making some further adjustments to the Boom Bow, Vacuum Tube Bow, and Vindertech Seeker as well.

The Boom Bow was recalibrated to have lower base impact, damage, and projectile speed, but now deals even higher damage when fully charged. Make them count!

The Vacuum Tube Bow now triggers its lightning on hit, rather than elimination and has a longer lightning range. Only 2 Targets? No problem! The lightning will now bounce between both of them multiple times as long as they’re in range.

I’ve improved the Vindertech Seeker’s homing arrows with significantly better accuracy and reliability. They can also hit husks at a much larger distance.

Additionally, some small impact changes were made to the following:

Fear not, I’ve made them eligible for reset in case the slight impact reduction isn’t your style.

Finally, Utility Perk slots on weapons (e.g. reload speed, magazine size, durability, stability) can now be rolled to damage if you want to go all in on those Husks!”

“Let's move on to those underperforming traps. I’ve enhanced the damage of just about every trap with the exception of Gas and Broadside traps… these were already extremely powerful and are seeing a minor reduction. Both are eligible for reset as well!

I’ve had a pretty big break through on Nature Traps. Turns out that you can put Energy Damage on them if you turn the capacitor flux just right. Either way, this is a new standard option for our Nature Traps.

I’ve tightened the spring load on Ceiling Drop Trap tires to have a little more bounce off their release. This will let them hit multiple times. Take that Husks!

My new favorite out of this change is the increased range to Ceiling Electric Field traps. It’s quite shocking how much stronger they are with this new range. Stacking multiple in an area will brighten up your day (or night).

Finally, the Anti-Air trap was lacking some proper range. I’ve fixed that with a new range increasing perk!”

“Well Commanders... I’ve had some time to think during the Business Wolf Dungeon Packstravaganza… What if this HUD was in other missions? Time to find out! Make sure you adjust your HUD settings for optimal efficiency.

Join the Yacht club and add some luxury to your island or make your own secret hideout on the new Shark Island with the Yacht and Shark Galleries.